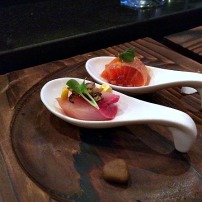 “Oh, so you do restaurant reviews!” is the response I often get when I reveal that I write a food blog. My negative response often puzzles. I love food and can rave as long as anyone will listen about my latest restaurant find.

The truth is that I used to do restaurant reviews, but I stopped. The stress of taking pictures of dishes in low light and taking detailed notes on ingredients was a drag. It made eating out less fun.

But there needs to be a place for me to rave about my loves, the restaurants I escape to on Saturday nights, preferably without kids in tow, to be fed, inspired and entertained. This page is that bookmark, quick snippets on our favorite places to dine in Chicago. Juno (2638 N. Lincoln, Chicago) – Our favorite sushi restaurant is finally re-opened after being closed due to fire soon after it first opened. Juno is a special night kind of destination, a temple of sushi budget buster. Once you select the nigiri pieces you’ll be having that night, the chef seasons them individually and sends them out to you in careful order. In addition to sashimi, nigiri and maki rolls, be sure to order the salmon or yellowtail that has been delicately smoked. It will arrive under a thick glass dome and will leave the most amazing lingering sense of smoke in your mouth.

The Duck Inn – Chef Kevin Hickey’s newly opened Bridgeport restaurant is a gem. Pre-order their roasted duck dinner when you make a reservation as the duck frequently sells out. You wouldn’t want to miss out on their signature dish: a whole duck roasted to perfection with gorgeous golden potatoes. It’s served on top of tossed greens with a citrus dressing, just the right thing to offset the rich duck. The waitstaff is attentive and knowledgeable and recommend great wine pairings for a special night. Looking forward to return soon and eat out on their outdoor patio.

Mexique – I’d heard about Mexique for years before going there. I always ask people about their favorite restaurant in Chicago and Mexique came up over and over again. The Michelin Guide gave it a star in 2013 and 2014, then removed it in 2015 for uneven execution. Steve and I finally made it there a few weekends ago, and fell in love with Chef Carlos Gaytan’s Mexican French fusion concept. We had the tasting menu and were blown away by the layers of flavor, the subtle heat in the creamy sauces. It’s the kind of meal that you think about all weekend, replaying each dish like a great song. I look forward to going back to try more fish dishes and the lamb. Definitely a great destination for a special night out. Davanti Enoteca (1359 W. Taylor St, Chicago) – This is one of our favorite places to take out of town guests because the food transports us right back to our summer in Italy. Reservations used to be impossible to get, but are doable now that they’ve added a second River North location. Their Aglia and Olio spaghetti starter is an inspiration – a celebration of simple perfection. Their Ligurian foccaccia stuffed with fresh soft cow cheese and a bowl of honeycomb is heaven on a plate. And when the waiter smears hot polenta on a well worn wooden board before topping it with the ragu of the day, I feel like I’ve come home and never want to leave. Eataly (Ohio and Michigan, Chicago) – Steve and I headed to Eataly a few days after it opened, and it felt like our secret. The next time we returned, about a week later, Chicago had caught on, and the place was packed. That hasn’t diminished our love for this bustling Italian marketplace and eatery. We love to sit in the atrium with a glass of chilled Prosecco, eating crudo and salumi. The spit roasted prime rib porcini rubbed sandwich is heaven. We talk to strangers and even sometimes break bread with them. It’s as magical as eating can get. The changes the Eataly management has made, especially adding more capacity to its pizza restaurants, have made it an even more worthwhile destination.

Gaetano’s (7636 Madison Street, Forest Park) – Gaetano is our little local gem, a restaurant that doesn’t feel like a suburban compromise. Chef Gaetano doesn’t skimp on quality and exotic ingredients and his enthusiasm is contagious. You never know what he’ll have splurged on for dinner, from wild boar to high quality seafood. He has received many awards and is recognized as one of the top Italian Chicago restaurants. Since opening a second Gaetano’s in Batavia, the Forest Park site misses some of Chef Gaetano’s attention, but we still love this hearty Italian restaurant with its exuberant menu.

Novo (734 Lake Street, Oak Park, IL 60302) – I know, I know, two Oak Park area restaurants, and who wants to eat in the suburbs if you don’t live in the suburbs? But this new addition to the Oak Park dining scene is a gem, and worth dining in even if you don’t live in Oak Park. The small but exciting menu features beautifully sourced produce and meat and seafood as well as fresh pastas. Their oysters and beef tartare make me so happy. And the wine selection, curated by owner Neb Mrvaljevic, is filled with exotic wines you’ll want to add to your regular repertoire.

Many Saturday nights, all I long for is a great cocktail. A perfect date night involves Steve and I successfully nabbing two stools at the bars of these restaurants and enjoying pretty cocktails and bar bites.

Sepia (123 N. Jefferson Street, Chicago) – When we want a great cocktail without all the fuss of following the latest trend, we head to Sepia. The paneled bar feels classy and grown up without being stuffy, and the cocktail list is inspired.

The Aviary (Corner of Fulton and Market) – This Grant Achatz cocktail bar that shares a space with Next Restaurant is well worth experiencing. The bar food is very limited but highly memorable. We still dream about the foie gras snickers bar. The cocktails are close to the price of a main course in many restaurants, but are served with such theater (bunson burners, infused ice cubes, popped out of bags of flavored smoke) that they are worth every penny… at least once. Alinea (1723 N. Halstead, Chicago) – If you’re on an expense account, and can score a reservation, head to Alinea. This Grant Achatz ultra modern restaurant will blow your mind and your palate. The food is not only incredibly clever but it’s also delicious. We are eagerly awaiting the reopening of Alinea later this year. El Ideas (2419 W. 14th Street, Chicago, IL, 60608) – A meal at EL Ideas is wildly different than your typical restaurant night out. It’s more like a very cool dinner party or a pop up supper club in a permanent space. The restaurant is in the middle of nowhere, tucked into a squat building at the end of a short dead end alley in Douglas Park. You pay when you book – between $155 to $180 per person (not including drinks). It’s BYOB and a 7 course menu is served simultaneously. You are encouraged to wander around the kitchen as the staff is plating the next course. Our first course had no utensils – we were told to lick it off the plate. The fun and wildness went on from there, but the quality is top notch and it’s not just a gimmick. A night at El Ideas is a dinner you’ll be talking about for a very long time.