As a graduate of a New England boarding school, I was very curious to read the Starboard Sea by Ambert Dermont. This was Dermont’s debut novel. I have a special appetite for boarding school coming of age novels, from a Separate Peace to Prep. I’m hungry to see how the author chooses to depict boarding school society and how it compared with my experience. 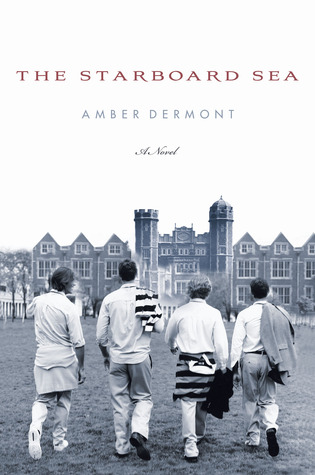 The Starboard Sea takes place in the late 80s at a third rate boarding school that caters to students who have been kicked out of other New England institutions.

If you could pay, you could stay. … The school catered to thieves, sluts and dope fiends, it was understood that additional transgressions would be overlooked.

Jason Prosper comes to Bellingham Academy as a senior, reeling from the death of his best friend and former roomate, and crippled by guilt over an unstated offense. He is a talented sailor and deeply flawed individual, struggling to find his way in this new school. Through his eyes, we learn about the world of privileged Manhattan youths, filled with unique problems and pain.

The Starboard Sea didn’t allow me to truly relive my boarding school years because the corruption depicted at Bellingham Academy was much more extreme than anything I ever witnessed. Once I was able to stop comparing the boarding schools and fully immerse myself in the story, I fell under its spell. I loved the sailing scenes. Dermont’s writing is lyrical and beautiful and her characters, both big and small, are painted vividly.  She writes this about Bizzy, a minor character and former girlfriend of Jason’s.

In her endangered animal fur and riding boots, she looked like a character from a Russian fairy tale, like a snow queen who needed to be set on fire.

When a book moves me, I record favorite lines in my writing notebook. I filled a page with tightly scrawled phrases from the Starboard Sea, but I didn’t stop there. I also sent two copies to my sister and father, and am waiting eagerly to hear their thoughts. I’ll also be recommending it to my book club, as a novel chock full with discussion topics about class and crime and sexual awakening. I highly recommend it.

2 Responses to The Starboard Sea by Amber Dermont