I heard about the Goldfinch by Donna Tartt for months before I sank down on the couch this January and began reading it. I read about it in the New York Times and Entertainment Weekly. It topped the Amazon 2013 best books list and popped up over and over again in my GoodReads recommendations. But what really drove me to pick up this door stopper of a novel was the number of people who talked to me about it. Regardless of whether they loved it or hated it, the Goldfinch was the type of novel that moved people. Donna Tartt’s previous novels, the Secret History and the Little Friend were also gripping reads. 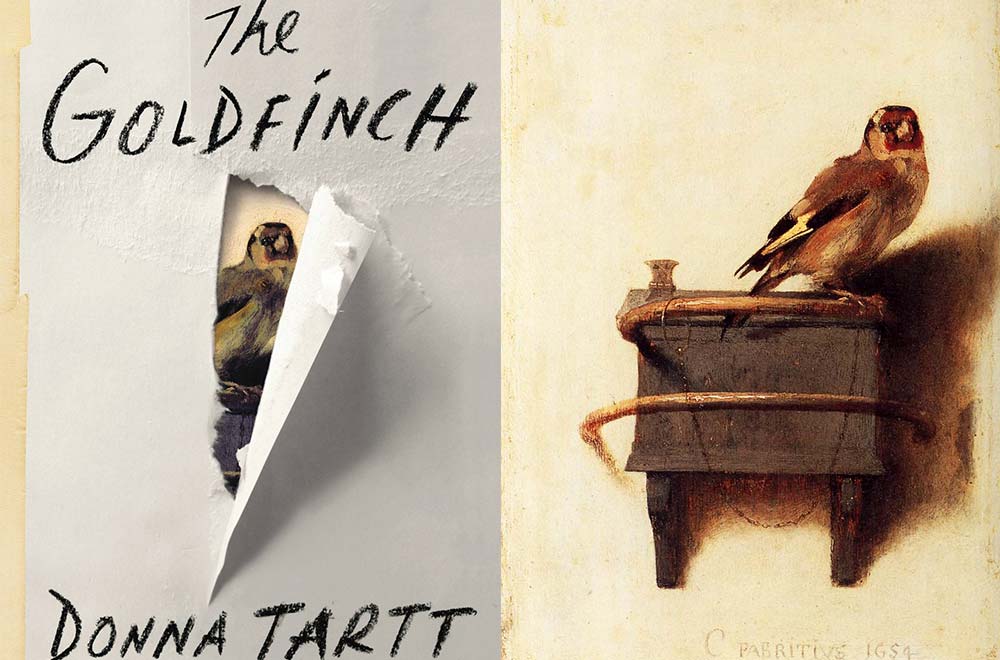 Along with my book club, I carved out the time to read this 771 page novel. But instead of reading it soberly and responsibly, I read it in great binges, staying up until 1:30AM, even 2AM once. The story is so tragic that it had me sobbing after the first chapter and I was so invested in the main character’s fate that I could not put it down.

Without spoiling anything, I’ll tell you that the Goldfinch begins in Manhattan, when a Theo and his mother are traveling cross town to meet with his private school principal to discuss his possible expulsion for being caught smoking. He’s a scholarship student and although the school has been lenient since his father disappeared, their patience has run out. He’s cranky from not having breakfast, but remorseful and loving enough of his mother to not object when she suggests they kill a little time before the meeting by stepping into the Metropolitan Museum of Art. There’s an exhibit of Dutch paintings she wants him to see, and as they move from room to room, we get a sense of their close relationship. Then, the unthinkable happens, a bomb explodes, and Theo’s life is thrown on a very different course.

All of this occurs in the first 30 pages. Before taking us to the day of the bombing, those last few hours Theo has with his mother without knowing it, hours he will replay over and over and over again, wishing to change something to keep her safe, Tartt gives us a sense of the depth of his loss.

Her death the dividing mark: Before and After. And though it’s a bleak thing to admit all these years later, still I’ve never met anyone who made me feel loved the way she did. Everything came alive in her company; she cast a charmed theatrical light about her so that to see anything through her eyes was to see it in brighter colors than ordinary – I remember a few weeks before she died, eating a late supper with her in an Italian restaurant down in the Village, and how she grasped my sleeve at the sudden, almost painful loveliness of a birthday cake with lit candles being carried in procession from the kitchen, faint circle of light wavering in across the dark ceiling and then the cake set down to blaze amidst the family, beatifying an old lady’s face, smiles all around, waiters stepping away with their hands behind their backs – just an ordinary birthday dinner you might see anywhere in an inexpensive downtown restaurant, and I’m sure I wouldn’t even remember it had she not died so soon after, but I thought about it again and again after her death and indeed I’ll probably think about it all my life: that candlelit circle, a tableau vivant of the daily, commonplace happiness that was lost when I lost her.

I was sobbing by then, picturing that very scene brought to life so vividly by Tartt’s gorgeous writing, so incredibly moved by the grown man’s reflection on his life longing for his dead mother. This sense of tragedy remains for the rest of the novel, this ache to scoop up and nurture Theo as his life and choices get progressively worse. It’s most definitely what kept me up at night, but what makes it all so good is the beauty of Tartt’s writing and the incredible plot she serves up.

You would think that a novel that begins with a terrorist attack in the first 30 pages would have a hard time sustaining a thrilling plot, but the Goldfinch is thrilling almost to the last page. Theo encounters so many colorful characters and is torn away from the Manhattan of his youth. I was consumed by this novel, sharing the best plot twists with anyone around me, until I got to the end.

Our book club discussion of the Goldfinch was rich and heated, probably one of the best ones we’ve had. And we only scratched the surface. I could have talked on and on about it all. I highly recommend The Goldfinch. You need a great read like this to get you through this hellish winter.

5 Responses to The Goldfinch by Donna Tartt