Macaroni and cheese. What color comes to mind when I say that phrase? For me, it’s a bowl of creamy colored shell noodles bathed in an equally creamy sauce made from artisan cheeses. For my kids? A day-glo orange sauce coating tiny elbow noodles. A few years ago, I decided to show my kids what real homemade macaroni and cheese tasted like. They almost threw it in my face. It’s taken years, but thanks to this bacon infused macaroni and cheese, I’ve finally gotten them to accept homemade mac & cheese. 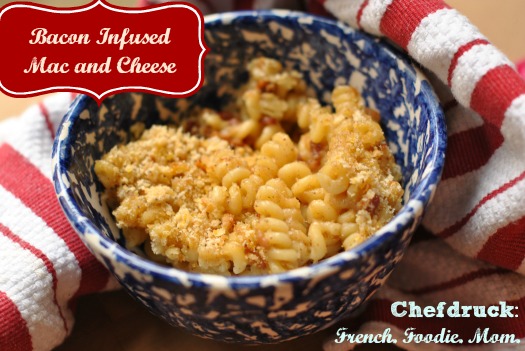 This bacon infused mac and cheese is good. Really good. I start with a mellow cheeses like a French comte that I punch up with a little parmesan. Then I crisp tiny chunks of bacon. And I boost the bacon flavor by using bacon fat instead of butter as the base of the cheese sauce. And to finish it all off? I top the whole extravaganza with crumbled corn bread stuffing. But the taste is only part of the reason why it’s become a family favorite.

The main reason my kids are sold on homemade mac and cheese? I never refer to it as mac and cheese. Why invite a comparison to the fluorescent orange stuff? They love what I call Mom’s Baked Bacon Noodles and that’s all that matters. This may smack a little of the Jessica Seinfeld sneak veggies in method, but I beg to differ. There’s no lying going on here. No hiding. Just a little rebranding.

To make sure there’s no confusion, I even use different noodles. Instead of the typical elbows, I use these crazy curly noodles from our local Italian cheese shop called Pastene Fusilli 23. You could also use orecchiette or egg noodles, or anything fun with some natural pockets to hide all of this lovely cheesiness.

If you’ve struck out before with homemade macaroni and cheese with the picky eaters in your crowd, give this recipe a try. It’s an easy solution for busy nights running around, just assemble it in the morning and rewarm it in the oven at dinner time for 20 minutes. You might even want to throw in a few veggies. And thanks to the rebranding of homemade mac and cheese, get ready for a dinner without any complaints, and even a possible compliment or two. It’s like music to my ears.

Bacon Infused Macaroni and Cheese To Please the Pickiest Eaters