My cooking is done in large batches nowadays. It’s not uncommon to find two chickens roasting in my oven and double pans of duck fat potatoes crisping on the stovetop, while the slow cooker labors alone in the background, filled to the rim with creamy bolognese sauce for the next night’s dinner. I sometimes feel like I’m running a chuck wagon, cooking mountains of food for a rowdy crowd that’s been known to throw food on the floor with disgust. Every once in a while, I rebel and cook just for me, and it feels indulgent, like a love letter composed with food. Today’s valentine, desperately necessary when I woke to a snow covered world, was a steaming bowl of creamy bacon soup. 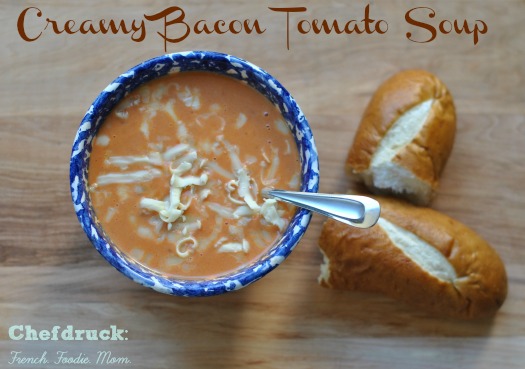 The soup was improvised, layer upon layer of goodness, each spontaneous ingredient another rebellious act. “Mine, all mine!”

The sweet vidalia onion bathed in salty Irish butter until it gave up and turned golden. It was rewarded by a generous splash of sherry, scandalous in the middle of the day. Pancetta bits had to come next. Bacon just has to be part of the fun to be truly decadent, along with a vigorous dash of ancho chili powder. Bring on the heat. I can take it.

An ordinary can of tomatoes would have been fine, but a special fancy reserve hand diced tomato made me feel regal. Heavy cream had to be next, rich white ribbons in a sea of red. After a violent boil, the flavors were shocked together, ready for the final flourish: fontina shavings. I would have gone with a smellier cheese, a pungent raclette or even a few chunks of triple cream brie, but none were on hand.

And finally, alone in my quiet house during the last hour of school, I slurped my steaming soup, dunking chunks of pretzel bread into its creamy, bacony goodness. Selfishness never tasted good.

2 Responses to Creamy Bacon Tomato Soup: A Love Letter to Myself