One of my greatest failings as a mother is not raising bilingual children. I’ve tried, believe me, I’ve tried hard. Bella only spoke French until she was three. Her first words were French, we joined French playgroups, read French books, and watched French movies. When she was joined by Jack and later Juju, I felt so outnumbered that I joined the rest of our family speaking in English. With Baby Sophie, I have another chance, and renewed motivation. We’ve joined a French playgroup and I’m searching for a French for tots class to enroll her in this Fall.

Language Stars is one of the schools I’ll be checking out. They currently have an open house for prospective students going on at their 15 centers across Chicago between July 29 and August 17. Parents who sign up for an open house appointment can check out a class, receive a $100 discount, and could win an Ipad Mini loaded with foreign language apps. In addition to French, Language Stars teaches Spanish, Italian, Mandarin, and German. They contacted me to put the word out to my readers about their promotion. I decided to not only share the information with you, but also participate!

We’ll be headed to their Lincoln Square Center location right when we get home from France, with our ears still ringing with the sunny Provencal French accent. Language Stars uses a FunImmersion method of instruction, teaching students foreign languages using songs, play, and crafts. I’ll be signing up both Juju and Sophie for a trial class, seeing how their approach works for toddlers and 1st graders. Sophie will be with me in a Mommy and Me class and Juju will take part in a kids only 5-8 class. I may even have 9 year old Jack try a Language Blast experience. 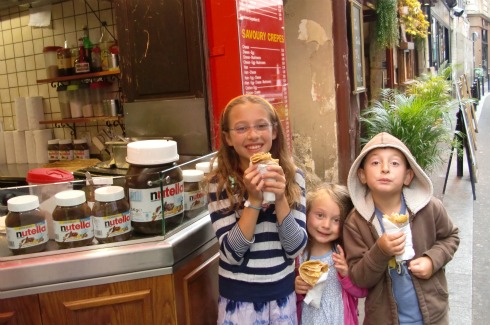 When Bella began middle school last year, she registered for French and began learning the language all over again, with her abcs and her numbers. She often shares stories of our travel to France and descriptions of the French food we eat at home with her class. This summer she’ll be eager to engage with shopkeepers and anyone else we meet in France. I hope this fall, she’ll continue to practice her French with her younger sisters who’ll be learning right alongside her. I have big plans for instituting a Dimanche Francais day where we only speak French.

Hopefully this year will become the year that my children not only eat French, but also speak French. Allons y!

← Chicken Thighs on the Grill: a Three Ingredient Marinade Yields Perfection
Jazzed Up Quesadillas and More With Avocado Love →