My kids are two weeks away from their last school bell of the year. They’re counting the days, and so am I. I should be busy buying sunscreen and swimsuits, but instead I’m planning my summer reading. Once my monsters are out, free, and wild, I won’t have the time to pile my nightstand with a carefully curated stack and I’ll end up grabbing random books on my way to the pool, wasting valuable summer reading time with average books. To keep you from making that mistake, I have two great books to recommend to you. 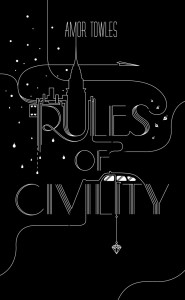 Rules of Civility by Amor Towles

Rules of Civility is a 1930s Fitzgerald tale with a strong female heroine. Katey, formerly Katya from New York’s outer boroughs, is restyling herself as she is drawn into the upper echelons of New York society, rubbing shoulders with rich youths named Bitsy and Tinker. Through the aunt of one of her new friends, she lands a coveted job as an assistant at Conde Nast, but continues to see her new world through her humble roots. She gets involved in a tragic love triangle with terrible consequences and chronicles the entire story with beautiful prose. This is Amor Towles’ first novel. It was well reviewed by the New York Times and Publishers Weekly when it came out in 2011.

Gods of Gotham by Lindsay Faye

This is another book set in New York City, but much less genteel than Rules of Civility. This historical fiction crime thriller takes you to New York City in 1845, a bloody time when the city was rife with immigrants fleeing the Irish Potato Famine, prostitutes, union unrest, and crime. A new police form has just been formed and poor orphans and child prostitutes are being murdered and horribly mutilated. Timothy Wilde, recently mutilated in the great fire, finds new employment as a Copper Star, the new police force. He should just be patrolling the streets, but can’t keep himself from investigating the gruesome murders, and dives in deep to the underworld of prostitution, political parties, and the slums of New York. If you liked the Alienist by Caleb Carr, you’ll love this novel that plunges you right into the chaos of old New York.

So now I’ve done my part, it’s time for you to help me out. What should I add to my stack from your faves of summers past?

And while we’re at it, let’s connect on GoodReads and keep the sharing and recommending going.

2 Responses to Rules of Civility and Gods of Gotham: Two Summer Reading List Must Haves