Downton Abby is like a dream and last night that dream ended with the Season Three Finale. We’ll have to wait another long ten months for the next installment of beautifully dressed English period drama, but there is a way to ease the pain.

Lose yourself in the American Heiress by Daisy Goodwin. (paperback by St Martin’s Press, March 2012) 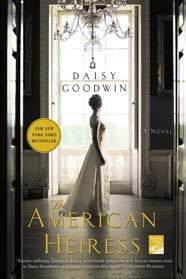 Think of this novel as the prequel to Downton Abby, the story of how Cora came to marry Lord Grantham and move to Downton. The novel actually has no affiliation with Julian Fellowes and the Downton Abby story, but it has enough similarities to do the trick and continue to plunge the reader in a similar world.

The story begins in Newport, RI in 1893. Cora Cash (horrible name but bear with me) is a rich heiress to a flour fortune, an only child. She’s beautiful and spoiled, but a sympathetic character, trapped the expectations of her strict and cold mother. After much shrewd social climbing, her mother is at the top of the social pyramid and her parties are affairs filled with lavish effects like gold painted hummingbirds released after dessert and costumed farces to dig for real diamonds and gems. The party descriptions are all drawn from historical record and fascinating. Mrs. Cash won’t feel like she has achieved the ultimate social success until she has secured a title for her daughter in Europe by marrying her to a nobleman.

Soon the mother-daughter Cash team travel to England and jump into the British social circuit, attending balls and hunts at crumbling majestic castles throughout England. Cora doesn’t think much of the dated fashion the English noblewomen wear and bristles at the elaborate etiquette. She loves a boy back in Newport, and can’t wait to elope with him. But during a a fox hunt she takes a nasty fall and wakes up in the woods, being rescued by the Duke of Lulworth. He invites her to rest from her injury at the castle for a few days and that is all the opening her mother needs to swoop in and secure her daughter’s title.

If it sounds as if I’ve told you the entire story, never fear: I’ve only set it up with the first few chapters to give you the flavor of the novel. This isn’t your typical bodice ripper fare. The novel is well written and fun, nothing you need to hide in a kindle. Goodwin drew extensively from the life of Consuelo Vanderbilt in creating Cora Cash. She also adds an interesting subplot about the difference in race relations in the US and England because Cora’s maid is mulatto. The American Heiress was even reviewed in the New York Times. You’ll find yourself rooting for Cora Cash and her damaged Duke, and when the 465 page book comes to an end, you’ll wish it could go on and on, just like Downton.

← Chocolate Souffles to Close out Valentine’s Day
Sweet and Crumbly Sables: a Grown Up Sugar Cookies for the Entire Family →

One Response to An American Heiress: The Book to Ease Downton Withdrawal Symptoms