Chances are that you’ve had a Croque Monsieur, the French take on grilled cheese sandwiches: bread, ham and cheese bonded with a generous dose of creamy bechamel sauce. But have you had Croque Monsieur’s better half, the Croque Madame?

A Croque Madame is essentially a grilled ham and cheese with an egg on top. Stab the yolk with your fork, and each subsequent bite is a symphony of cheese, ham and egg: ingredients that were meant to be together, just like Monsieur and Madame. Few things are not improved by a runny egg yolk, and Croque Madame is no exception. 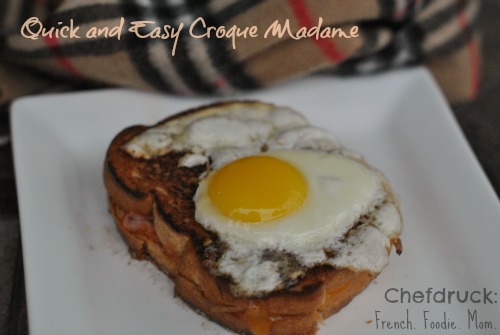 The Croque Monsieur was first officially referenced by Marcel Proust in 1918 in his lengthy 15 volume A La Recherche du Temps Perdu. But I have not been able to dig up any rumors of the Croque Madame variation. I’m not sure why adding a fried egg on top of a sandwich makes it more feminine. On an American menu, the addition of eggs tends to earn a dish a big boy special nickname, but in France the egg makes it a feminine dish. Perhaps the Croque Madame is an homage to women tied to the fertility symbolism of the egg. But rather than ponder the deep hidden meaning of the Croque Madame, I’d rather tell you how to make it.

Purists will no doubt take issue with the fact that this Croque Madame is not topped by a Sauce Bechamel. It’s true, bechamel binds the sandwich together and takes it to an entire new level. But on a rainy Wednesday afternoon, with a sick baby on my hip, whipping up a quick bechamel sauce is just not in the cards. But consoling us both with a buttery brown quick and dirty Croque Madame is just what we both need. 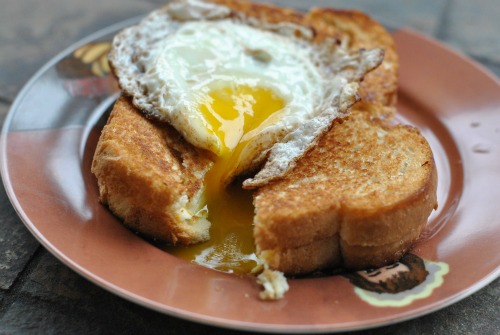