Have you fallen under the spell of Downton Abbey yet? Judging from my Twitter and Facebook feeds, it seems as though more people are passionate about the fashions and scandals of the Grantham family and their servants than about the upcoming Superbowl. I certainly am. My Sunday nights are devoted to Downton Abbey, and when the baby cries later that night, it takes me longer than usual to realize that my arm is not draped in sleek, silky black gown, and that I cannot summon a servant to deal with the child.

Much of the drama of Downton Abbey takes place over dinner, usually over the soup course  and often even during the drinks preceding dinner. I’m not sure I have ever seen the family consume dessert. But if you’re wondering what types of desserts the Grantham sisters are skipping to remain so languidly thin, you’ll find the recipes, along with recipes for every other possible course, in the Unofficial Downton Abbey Cookbook by Emily Baines.

The recipes span not only what Mrs. Patmore would prepare for the Grantham family, but also what the servants would eat downstairs. This well-researched, and entertainingly written cookbook is filled with anecdotes about the characters as well as wonderful background information on etiquette and culinary trends in England at that time.

Watching Downton Abbey is a delicious treat, like falling down a rabbit hole into a grown up pretend world, filled with sleek dress up clothes, evil villains, and dazzling damsels in distress. I’m not sure what’s more alluring: their leisure time, where a long walk with joyful labradors along green rolling hills constitutes a day’s work, or the spectacle of dressing for dinner.

After last night’s heart-wrenching episode, I imagine that many of the upstairs and downstairs residents of Downton Abbey drowned their sorrow in a warm bowl of Classic Vanilla Rice Pudding. Emily Baines notes that this very literary dessert is mentioned by Charles Dickens, Jane Austen, T.S. Eliot, and A.A. Milne, and would have been eaten by everyone at Downton Abbey at least once in their life although it would be considered a common dessert, not fancy enough for dinner upstairs. 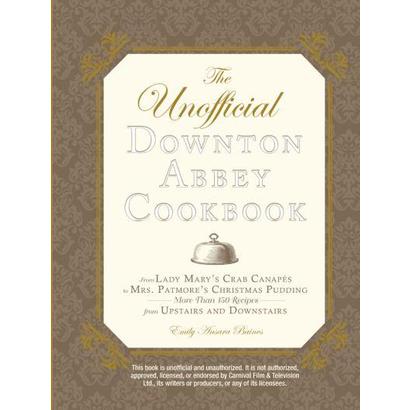 The only thing missing from the Downton Abbey Cookbook is a chapter on stiff drinks, something else the members of the Grantham Family enjoy frequently. 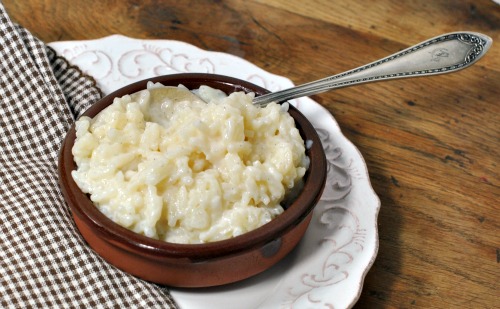