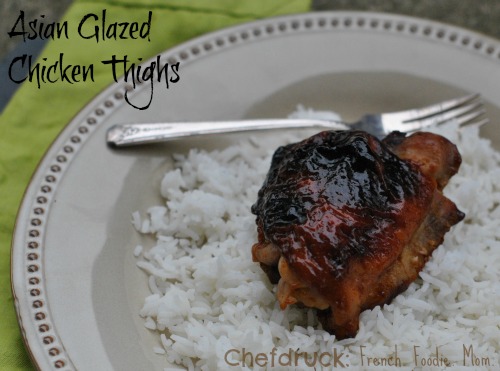 This recipe became an instant weeknight classic, the first time I made it. The kids had no idea that I thought anything radically inappropriate about the chicken’s body part. They just knew that this chicken was sweet, salty, and oh so good. They knew they were licking their fingers, and they knew they wanted more. But my husband was another story. As he licked his fingers, and asked for more chicken, he looked at me with eyes of love, was no doubt thinking that chicken thighs were highly erotic. You know the old saying. The way to a man’s heart is definitely through his stomach.

I love that this addictive dish is one that’s made fairly effortlessly in the oven. And I love that it’s a cheap cut, priced under $3 a pound. You’ll just have to keep the kids at bay when you open the hot oven a couple of times to baste the chicken to give it that sultry sheen.

← Snacks that Satisfy: Pork By Fork Year of Pork Giveaway
Prayers and Thoughts for a Private Man →