Have you ever wondered what the inside of a modern hog farm looks like? I was more than a little nervous last week when I set off to visit the Wuebker Family Farm, but was pleasantly surprised by what I saw, smelled, and learned during the trip. 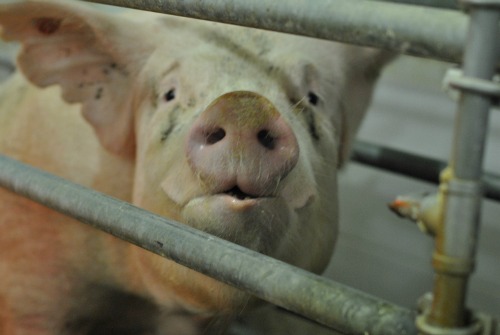 While I probably wouldn’t pick a weekend at a hog farm over an essential oil spa massage, my visit to the Wuebker Family farm didn’t smell as strongly as I feared, particularly considering the thousands of hogs and piglets housed there. I also anticipated being disturbed by the animals’ restricted movement and crowded living conditions but all I had read about farrowing crates made more sense once I saw them in action. I was also surprised and relieved to learn that the use of hormones to speed growth is strictly forbidden by the FDA. 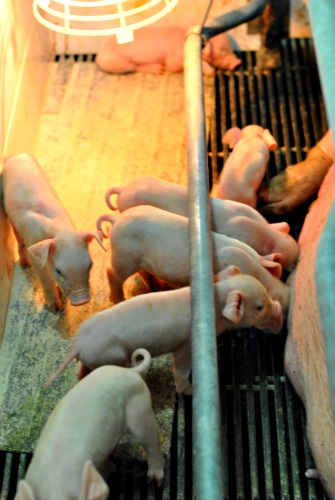 The Pork Checkoff hosted me and five other bloggers for a trip to the Wuebker Hog Farm in Ohio to showcase the farm’s environmental efforts. The hog waste is efficiently pumped to two large thickly lined 1.8 million gallon ponds that are tested multiple times a year before being used as manure on farmland on Wuebker and neighboring properties. The hogs are kept cool with low energy technology and the entire farm is lit with environmentally friendly CFL lightbulbs. Instead of straw, the pigs are on concrete and grates that funnel all waste directly to the manure pits. 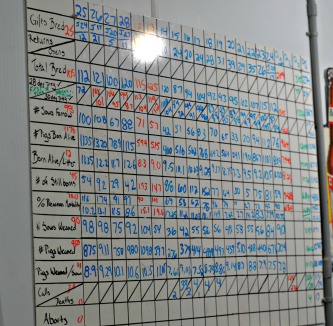 Everywhere we turned, signs of pig farming’s technological and environmental improvements were easy to see. The farm was a model of efficiency, with long rows of sows on the same birthing schedule. Each animal is neatly entered in a pig database and the workroom had a whiteboard with key metrics such as average piglets born per sow, average weaned, and average birth weight. Runts of the litter are saved by being moved to litters of smaller piglets. There was no doubt that this was the farming of the future, worlds apart from hog farms 25 years ago that let large herds of pigs wallow in mud outside, polluting nearby streams. 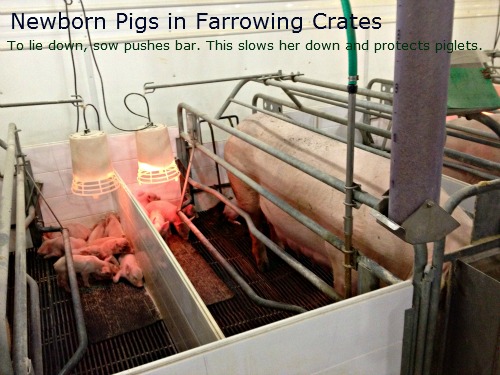 The pigs spend the majority of their life in one of two cages or crates: farrowing and gestational. Both types of cages keep the sows from turning around but let them lay down and stand up. The farrowing crates restrict their movement to protect their piglets. A mother sow weighs around 300 pounds while a newborn piglet is about three pounds. I saw a sow lay down on a piglet, completely unaware of his squeals, until the farmer nudged her over and saved his life. The gestational cages are smaller, lining the sows in the same direction to monitor their insemination and pregnancies. Once the piglets are 21 days, they are moved to a finishing facility to be fattened up for another six months. There I presume they have a little more room to roam around, but we did not see a finishing barn as part of this trip. 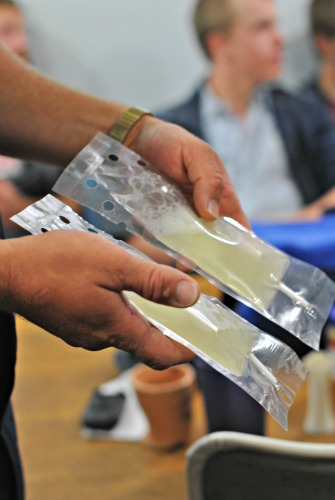 We were able to witness both the birth of piglets as well as the insemination of the sows. Pregnant sows are grouped in due date rows so their births can be more easily monitored. They labor over a few hours, giving birth to eight to twelve piglets, and occasionally as many as 20. The piglets latch on within minutes of being born, claiming the teat they will return to every time they feed for the next three weeks until their weaning. Their pregnancy is monitored by ultrasound. The sows have two to three litters a year, until their fertility or fetus viability decreases. As thanks for their years of service, instead of retiring to a nice community in Florida, they become breakfast sausage. 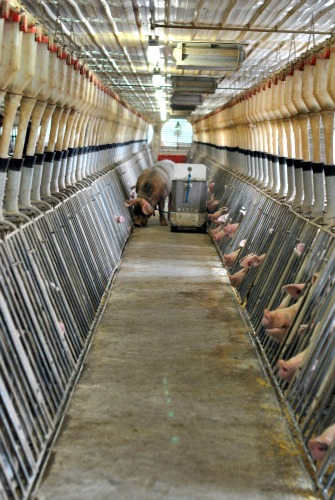 Hog impregnation is something out of a science fiction movie. The insemination is done without intercourse but still with the participation of one boar whose ego must be as large as his testicles. He walks down a long aisle of sows, guided by a robot on wheels, and his manly gait and scent drives all the sows into wild, panting heat. You haven’t heard loud until you’ve heard a hundred horny pigs squealing for their stud. As the boar nears a sow, one of the farmer confirms that she is in heat from her body language and inseminates her with a bag of sperm purchased from a farm specialized in hog breeding. Through genetics, breeders incorporate farmer feedback to produce pigs with desired characteristics: leaner, longer, and better milkers or larger litters. The same process is repeated the next day and typically 85% of the sows conceive. 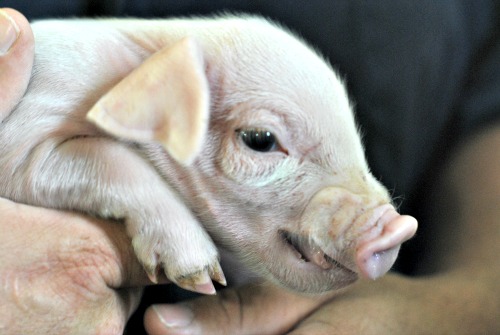 With so many animals in such close quarters, the risk of disease is tremendous. In January, an airborne respiratory disease called PRSS (Porcine Reproductive and Respiratory Syndrome) infected the hogs on the Wuebker Farm. The sows stopped eating and spiked fevers. The farmers responded by pulsing antibiotics and ibuprofen through the feed but still lost 13% of their herd. The farm typically births 5,600 pigs a week, but while the sows were infected, weekly births dropped to 800 due to stillbirths and weak piglets. 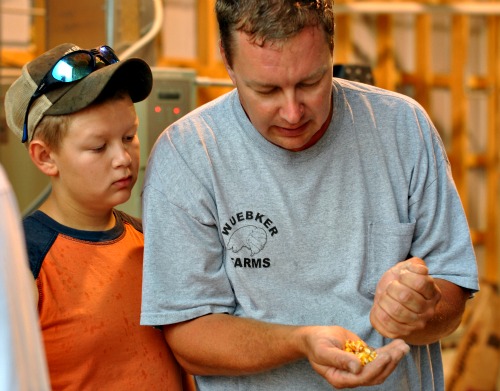 Unlike the cattle industry, the feed of pigs hasn’t drastically changed from grass to grain. Pigs have always been omnivorous, eating scraps. Their diets are now much more closely calibrated by animal nutritionists who prescribe a precise combination of corn meal, soybean meal, and key amino acids and probiotics depending on whether they are lactating or gestating. 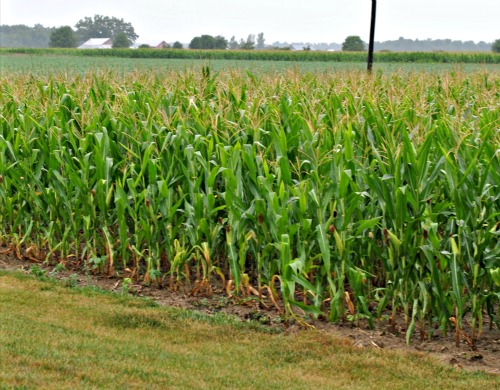 Like the dairy and corn farms I’ve visited on other blogger tours, I was struck by the difficulties and financial risk of farming life. The current drought has caused a huge percentage of the corn crop this summer to fail. The effect has already been felt in hog prices, and the Wuebkers are currently losing close to $20,000 a week as the price of a baby pig has dropped from $35 to $10. The Wuebker’s care for their pigs was apparent in their references to them as “mamas” and “girls” and the way they patted them and handled them. These animals are their lives and they work tirelessly to treat them well so they are healthy and productive.

It took me a few days to reflect and process my feelings about this trip. While I was impressed by the cleanliness of the hog farm and the measures taken to protect the environment around it, and relieved that hormones are not used to improve production, I still felt disturbed by the size of the operation. Having so many animals grouped together makes the farms very vulnerable to disease. Farmers protect the herd with preventative vaccinations and mass antibiotic administration when illness strikes. The fact that the animals have to be treated as a group, instead of individually just increases my unease. Yet pork is much cleaner now than it used to be, and the incidence of trichinosis in domestic pork in the US has been eradicated, and I am more confident now than I was before the trip about mass produced pork.

There’s no doubt that we consumers have an overly romantic notion of farming. We want the animals we eat to roam free in endless green fields, but most of us cannot afford to pay farmers’ market prices for all of our meat. And when we are confronted with the reality of what it takes to produce meat at low prices, we recoil in horror. I am still coming to terms with the realities of farming today. Since coming home from Ohio, I’ve found myself thinking of those little piglets born at my feet every time I reach for pancetta, bacon, or pork tenderloin, but I haven’t changed my pork purchasing habits, continuing to buy conventional pork products. If anything, I feel better knowing how they came to be, appreciating their flavor and tenderness.

20 Responses to Peeking Into the World of Hog Farming