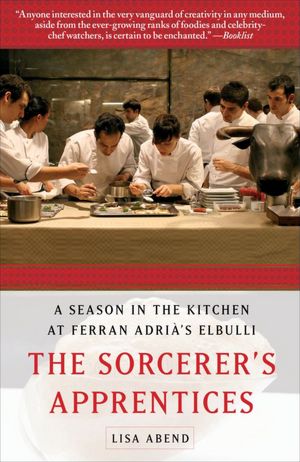 Do you consider yourself a foodie?

Being a foodie comes in many formats. A foodie can be someone who watches the Food Network religiously, sitting at the edge of their seat for each episode of Chopped while eating frozen Lean Cuisine dinners. Foodies share pics of their food on Foodspotting and Pinterest. And this may seem like a radical concept, but a foodie can even be someone who enjoys a good meal without feeling the need to share it electronically or otherwise, with anybody else.

I indulge in many foodie behaviors that many people would find strange (food blogging, food photography, and marathon cooking sessions to name a few), and my latest obsession has been to immerse myself in the now-defunct world of ElBulli via Lisa Abend’s well-researched and entertaining book, the Sorcerer’s Apprentices.

ElBulli, for those not in the know, was a little restaurant in a small seaside village in Spain with a waiting list of over 1 million people. Food enthusiasts from around the world traveled eagerly to ElBulli to experience the food of Ferran Adria, a chef widely credited as the inventor of molecular gastronomy and the driving force behind the future of food. Adria recently shocked the food community by closing ElBulli to convert it into the ElBulliFoundation sometime in the future.

Abend spent a season at ElBulli, observing and interviewing the 32 men and women volunteers who come to ElBulli for a season to cook and learn from Ferran Adria. The volunteers are called stagiaires and although some are young culinary students, many are experienced chefs, willing to work for free for six months to experience the kitchen of ElBulli. Some of the world’s most talented chefs have ElBulli on their resumes: Will Goldfarb, Rene Redzepi, and Grant Achatz to name a few. Although the food of ElBulli is thrilling, the cooking involves many high-tech gadgets and chemicals and is often tedious. The stagiaires rarely get to taste the dishes and only imagine the final product that they are assembling.

Each chapter focuses on a different stagiaire and a different aspect of life at ElBulli. In one we read about Luke, a former chef in the Korean army, who aspires to become a permanent cook at ElBulli. He wins a spot as a stagiaire by camping outside of ElBulli for weeks after a year of backpacking throughout the world, sleeping outside to save money to eat at the best restaurants. But as a stage, he grows tired of only working on creating fake lentils made from melted clarified butter and sesame paste.

In another chapter, we read about Andrea whose role as stagiaire is to assist in new dish development. Abend’s descriptions help the reader see the creation of dishes, watching Andrea, Oriol, and Ferran play around with freezing, siphoning, spherifying everyday and exotic ingredients. Sweet potato is spherifyed into gnocchi and dusted with parmesan, butter and truffles as a modernized version of pumpkin ravioli.  Raspberry powder mixed with water is painted on a stencil and then frozen before being served with a dollop of raspberry puree. Andrea records it all in a pristine notebook that contains all the recipes of ElBulli’s menu that year.

I had a wild and delicious meal at Alinea this fall with 20 dishes that left me thrilled and full. I am stalking the Next Facebook page to snatch up a table for the ElBulli tribute menu, but all those efforts will never be able to compare it to a meal at ElBulli. Still, reading The Sorcerer’s Apprentices helped me to imagine what that meal would have been like, from the hairpin turns up the mountain road to the restaurant to the box with secret drawers of chocolate concoctions for dessert.

If you love food as I do, you’ll love The Sorcerer’s Apprentices. Lisa Abend won’t make you want to work at ElBulli, but she will delight you with a thousand little anecdotes that will bring the restaurant to life.