Novels about World War II always take a special hold on me. I bury myself deep in their pages. I try to see the streets of Paris as they were in the 40s, to imagine what it would have been like to live in those times as my grandparents did, to watch the German tanks roll in, to have neighbors turn into enemies and strangers into heroes. As I read, the same question haunts me, “What would I have done if I lived in those times? Would I have recognized the forces at work? Would I have just tried to protect myself and my family or would I have tried to do more, to be heroic?” 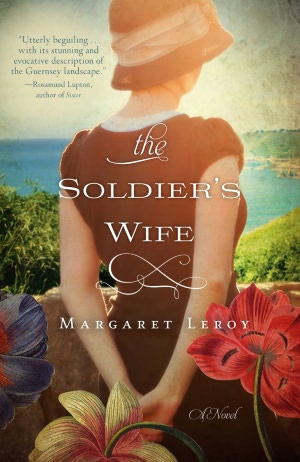 The Soldier’s Wife by Margaret Leroy is a wonderful World War II historical novel, filled with moral dilemmas, passion, and studded with rich historical details that transported me back in time, truly letting me see, smell, and often taste along with the characters. The novel takes place in the Isle of Guernsey, a beautiful island off the Southern Coast of England that was occupied by the German army. While her husband is away fighting, Vivienne de la Mare lives quietly with her two daughters and her mother-in-law who suffers from dementia. At first, the war seems remote and apart from most men being away fighting, the Guernsey Islanders are not greatly affected by the war. Then the Germans invade, and four German soldiers become their neighbors, and everything changes.

How do you adjust to living with the enemy in such close proximity? How do you keep your guard up day after day, during all the little encounters one normally has with neighbors, like when the cat wanders into their yard or when your daughter throws a ball over the fence?

Vivienne’s struggles in adapting to life under the occupation really rang true. I loved that the main character was a mother, whose greatest preoccupation was feeding and caring for her children. Vivienne’s relationship with her children is complex and real, brought to life with scenes of bedtime stories and school pick up. Margaret Leroy didn’t gloss over the effort of finding food in wartime. She describes how Vivienne makes cakes from potato flour and coffee from roasted turnips. She has her foraging for wild mushrooms in the woods. And when one of the Germans offers her family a bar of chocolate, she takes the time to describe the rich, exotic, forbidden feel of the chocolate as it melts in Vivienne’s mouth, leaving behind an aftertaste of guilt.

I could not put the Soldier’s Wife down, and whenever I was forced to do so, I felt dazed and disoriented, amazed to be in 2012 in a world of peace, Starbucks, and iPhones.

On April 29, the Gr8Books Twitter book club will be discussing the Soldier’s Wife with Margaret Leroy. I am really looking forward to the discussion and to hear Leroy’s insights as well as what other readers thought of the book. The Soldier’s Wife would be a wonderful pick for your next book club selection. Vivienne makes difficult choices, and you will definitely talk heatedly about how far you would go to protect your family, to help a stranger, and whether you can prevent falling in love.

I received a review copy of the Soldier’s Wife from the publisher, Hyperion. The book is available in paperback from BN.com and Amazon and is currently $6 there.