Let’s face it, we all have issues with our mothers. Your mother might be your best friend and only occasionally annoys you or you may be painfully estranged from her, having not spoken for the last decade. Regardless of the particular flavor of your relationship, the constant remains: every daughter has mother issues. It’s just part of our female DNA. Yet few people have the courage to tackle that relationship head on. Alexandra Fuller not only confronted her mother issues, she used them to write a gorgeous and thrilling memoir entitled Cocktail Hour Under the Tree of Forgetfulness that paints her mother vividly and honestly, and celebrates her on every page as her “broken, splendid, fierce mother.” 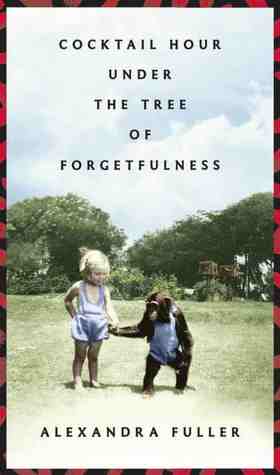 If you’re not familiar with Fuller’s other work, especially Don’t Let’s Go the Dogs Tonight, I suggest that you stop reading this and head straight to your library to take out all of her books. Fuller is not only a gifted writer, she also has an amazing story to share. She grew up white in Africa, moving from country to country as colonialism collapsed. Her childhood tales are interwoven with civil war, corrupt regimes, deadly snakes, and dozens of colorful characters.

While Fuller’s earlier works focused on her personal childhood, she takes up the pen again to write her mother’s story. Nicola Fuller, or as she frequently refers to herself, “Nicola Fuller from Central Africa”, is a colorful woman who would loom large in any narrative, even if not written by her daughter. Fuller begins with her childhood befriending chimpanzees and riding crazy horses and continues all the way through her busy retirement running a farm in Zambia and reflecting on life and her daughter’s annoying habit of writing “awful books.”

I’ve read many memoirs like Augustin Burroughs Running with Scissors that are full of hate and anger, but Fuller’s memoir, although honest, celebrates her mother. In one paragraph, she’ll criticize her for clinging to false worldviews:

“Mum pronounces the name of the country with a long, colonial-era e: Keen-ya, as if Britain still stains more than a quarter of the globe pink with its dominion. … Her insistence on the anachronistic pronunciation of the country only adds to my impression that she is speaking of a make-believe place forever trapped in the celluloid of another time, as if she were a third-person participant in a movie starring herself, a perfect horse, and a flawless equatorial light. The violence and the injustices that came with colonialism seem, in my mother’s version of events, to have happened in some other unwatched movie.”

Yet, in another section, watching her parents dance in a deserted hotel bar, she glimpses them as they were in their youth:

“Dancing together in the moonlight, Mum and Dad appeared as they must have in their twenties: beautiful, optimistic and aware of being the most exciting couple anyone had ever seen.”

Cocktail Hour Under the Tree of Forgetfulness is a beautiful, haunting, and sometimes heartbreaking read. My copy is fiercely underlined, creased, and occasionally stained with my tears. I’m not sure how Alexandra Fuller’s mother received this latest memoir, but I hope she understood what a tribute her daughter had written. The story will remain with you and will change the way you see your mother. I can’t recommend it enough.

← What Will You Serve for the Superbowl?
A Sweet Valentine’s Baking Giveaway →

2 Responses to Cocktail Hour Under the Tree of Forgetfulness: a Beautiful and Thrilling Memoir