Few things get me more annoyed than when my kids refuse to try foods, even when they decline with a polite, “No thank you.” They turn down chocolate mousse because it looks spongy and mashed potatoes because it looks too smooth. Only rarely do they indulge me with a cautious bite. It drives me bonkers, but when it comes to Brussels Sprouts, I was guilty of the same close mindedness. 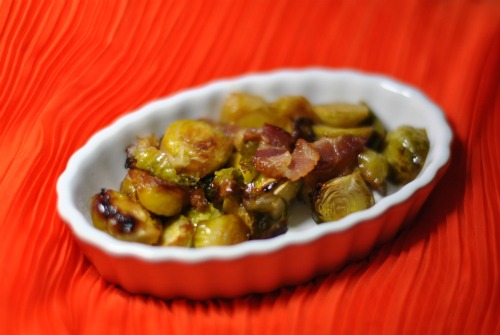 Brussels Sprouts are one of my father’s favorite vegetables. I knew I’d have to struggle to swallow a few of the vile little balls of bitterness long before dinner because their sulfuric smell filled our apartment long before the table was set. I complained, loudly, and begged to be spared from the dreaded sprouts. And as soon as I left home, I swore that I would never eat another Brussels sprout again.

I lived a blissful, Brussels sprout-free life for years, substituting them out of restaurant menus and skipping over them in buffets. And life was good.

Then one afternoon, I opened my weekly produce delivery basket and found two large bags of beautiful pale green Brussels Sprouts. The sun was shining through the window in just the right away, and I decided to give Brussels sprout another chance, helped along with a little brown sugar and bacon.

Caramelized and baconized, the Brussels sprouts were delicious, so delicious that I made them again the next week, cleaning the bowl each time. I cut them into thin slices to avoid that biting into bitterness phenomenon that so scarred me as a child. Each sliver was salty and sweet, caramelized by the brown sugar yet with a smoky saltiness from the bacon. They are addicting, and I’ll be using this recipe to convert Brussels sprout haters from now on, spreading the gospel of my new favorite vegetable.

So stop being a hater, a polite refuser and give Brussels sprouts another chance. I’m certainly glad I did. Now if I could only get my kids to try them, or even chocolate mousse for that matter!