I’ve thought long and hard about whether or not to blog about breastfeeding. After all, this is a food blog, a foodie mom blog, and it seems a bit off-topic and potentially off-putting. But you could argue that producing breast milk is producing food at its most primal, and as I have been spending the majority of my days for the last month and a half pumping and feeding my littlest child, and watching her thrive, I’ve decided to dive into the topic but without any revealing pics.

To say that nursing didn’t come naturally to me would be an understatement. It took me three children to get it right. 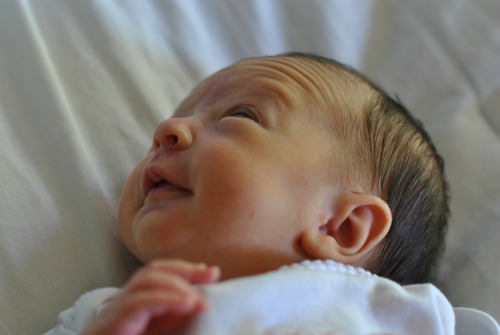 I could blame my difficulties with breast feeding on a post-partum encounter with a Nazi-like La Leche coach. I had waited for her for three hours, gently rubbing the bare chicken legs of my beautiful five and a half pound baby girl whose beautiful brown eyes looked into mine trustingly as I pushed her button mouth against my splayed nipples again and again without success. She just did not seem to have the strength to latch on.

When the lactation consultant finally arrived, she was unsmiling and unapologetic. She watched our awkward coupling for a few seconds and, without asking permission, brusquely adjusted my hold and mashed my daughter’s face to my breast. Soon she was grasping my breast and Bella’s tiny head, forcefully pushing them together while making “tsk, tsk, tsk” noises in her mouth. I was shaking with exhaustion and emotion, and all my new mother instincts were telling me just to stick a bottle in the mouth of my feather-weight daughter. To diffuse the tension, I stroked at the long hairs on my baby’s tiny arms, marveling that I had created this creature.

I turned to the breast feeding consultant and offered up the perfection of my first child, “Isn’t she beautiful? Look at her long soft hairs!” She screwed up her mouth with distaste and said, “It looks more like monkey fur than anything. Except even a monkey could latch on with more skill. You have a lot to learn little one.” I sent her away right then and there, appalled to have received my child’s first negative evaluation so quickly. But the truth is that the undiplomatic witch was just an excuse to give free rein to my terror of my breast feeding.

In my first few days of motherhood, I was terrified. Terrified of falling into post-partum depression. Terrified of developing cracked and bleeding nipples like the experienced mothers I knew. Terrified of confronting my naked body, day after day, inhaling all the primal post-labor scents my body was emitting under its nubby hospital gown. Terrified of starving my near-term infant to death, because, after all, how could I possibly create something nourishing enough to keep my child alive? The fact that I would be able to keep from dropping my baby on her head already seemed like too much to hope for.

I reached for the bottle almost to spite her, but really, it was to comfort myself. The label was right there, guaranteeing the nutritional content my child needed. I shoved my breasts back into my bra and began focusing on the mechanics of bottle feeding. I spent the next year regretting my decision, crippled with guilt that I had permanently eliminated any chance of admission to Harvard by withholding that magical IQ-enhancing, immunity-boosting elixir from her tiny mouth. I wished that I had tried harder, been more thick-skinned. When she strained to breathe during a vicious bout of RSV a few months later, the swollen nipples of the lactating mothers in our infant playgroup all seemed to be pointing at me, the weak and unworthy mother in the room.

Yet, even after all those guilt-ridden months, when I gave birth a second time, to a son this time, I chose not to breastfeed him. “Give him some formula,” I told the hospital nurses, “and you can keep him for the night.” I wanted to rest up, to get as ready as possible to split myself in two, to pay attention to the potty training of my jealous two year old while nursing a newborn. A few weeks later, when he turned colicky and started screaming from 10 to 2 every night, I regretted my decision, but my locked up breasts had dried up in their under-wire prison. I spent three long months trying to soothe his desperate cries, wishing I still had milk that might have eased his discomfort.

It wasn’t until I relinquished all control and had a third child that I finally experienced the peace and joy of breast feeding. When I walked in from the hospital with the baby, our homecoming couldn’t have been more chaotic. Instead of being lovingly placed in her carefully arranged bassinet, my daughter was unceremoniously deposited still in her infant car seat in a corner of the room while the older two children jumped and danced all around me, filling me in with all the events of the past three days. But the chaos put everything in place, giving me the confidence I needed to do what was right for each child.

Breastfeeding became my only escape, my time to bond with my third child. I nestled deep into our family room couch with my perfect little girl baby and other distractions faded to the background as I felt the ancient sweet pull of her tiny mouth. More often than not, our peace was interrupted by my other children, demanding that I pick a winner in some desperate toy dispute. Blissfully trapped amidst the couch cushions, all I could was shrug and smile, pointing at the nursing baby until they wandered off to play a different game. We all adapted to our new dynamics as a family of five during those first few months, the baby fitting into our family as naturally as she fed from my breast.

Now that Juliette is five, it is those quiet moments spent nursing her in the autumn afternoon glow that I remember with the most nostalgia. My children are a dizzying whirl of activity, only willing to slow down and settle close to me for a few short moments at night when we snuggle up to read before bed. I look at her mouth, filled with baby teeth that just started wiggling, and wish I could still cup her tiny little head in my hand as she draws milk rhythmically from my breast. I’m sure those baby days were more hectic than the idyllic moments I nostalgically long for, but those moments of breastfeeding bonding that it took me so long to achieve are my most treasured memories of early motherhood.

Every time I caressed my belly during this fourth and final baby, I looked forward to continuing our bond through nursing, but it has not come easy, even with all my motherhood experience. Sophie’s tiny preemie mouth was too weak to latch on, and I spent our first six weeks together juggling pumping and lengthy bottle feeding sessions. Instead of cradling with tiny Sophie in the corner of the couch, I hooked myself up to a machine while my older kids looked on with alarm. At the beginning of every feeding, I let Sophie fumble at my breast until she cried with frustration. I felt like letting my tears flow too: tears of exhaustion, of stress, of temptation to just give up and simplify things. But stress keeps the milk from flowing so I breathed deep, really deep, and bottled my tears.

Then suddenly, last week, the stars aligned and Sophie latched on. No crying, no screaming, just strong, quiet, deep pulls of her mother’s milk. Thirty minutes later, she fell asleep, full and peaceful. As REM sleep took over, her mouth relaxed into a broad, gummy smile, and finally, I let a tear flow.

21 Responses to My Long Road to Lactation