In stark contrast to my newborn milk filled days, I’ve just finished the most exciting thriller, Children of Paranoia by Trevor Shane. Like the title implies, the novel plunged me in a terrifying reality where, unbeknown to the general public, a savage war is raging. 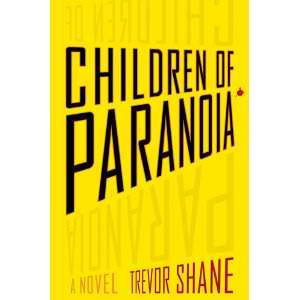 The families that are involved in the war belong to one of two sides, and have for as long as people can remember. When children turn 16, they are told about the war, and given two years to train. Once they turn 18, they are fair game, able to be targeted by the enemy.

No one knows what they are fighting for. Some believe that is for good and evil. Others believe that the struggle dates back to a distant slave/master dispute. But few actually stop to question the purpose of the war. The struggle is more basic, primeval, kill or be killed. Murder is widespread and when children reach 16, it is rare for them to have both parents still alive. Their desire for revenge motivates them highly to train to become soldiers.

The story is told in the form of letters written by Joe, a soldier in his late 20s with dozens of kills under his belt, to a woman named Maria. Their love story, and his attempts to free himself from the struggle are the backbone of the novel. The style is sometimes a bit awkward, with blatant foreshadowing as Joe expresses regret for actions he took, but it doesn’t take away from the action. This is Trevor Shane’s first novel, the first book in a trilogy, and it’s easy to predict his future success. I could not put this book down. It was an easy but thoroughly engrossing read and I can’t wait to see what he offers us up in his next thriller.