Over the last few months, I’ve read some articles in the New York Times that have terrified me, articles that seemed to be straight out of a futuristic science fiction model. The tone of the news has changed and events that seemed to be far off in the future, worries about the world we would be passing on to our distant descendants, seem to be part of our present, or at least our old age and children’s near future.

First there was the article about Chicago city planners changing the composition of the concrete and other building materials to accommodate the certainty of significant temperature increases in the next decade. Entitled a City Prepares for a Warm Long-Term Forecast, global warming was no longer a theory, but a certainty, a factor in city budgets. 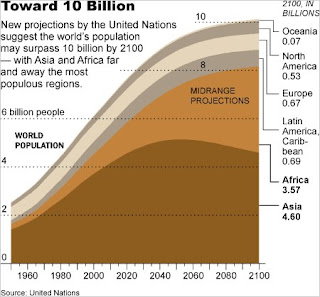 And finally there was this terrifying article in last weekend’s Sunday times, a Warming Planet Struggles to Feed Itself, about the decline in agricultural progress and the resulting food shortages. Large regions of Mexico that used to enjoy great farming climates have become deserts thanks to global warming, and our seed technology is not yet able to compensate for these new conditions. Throw in the recent cataclysmic weather events, the new appetite in Asia for dairy and meat, and the prices of staple crops like corn and soybean have gone through the roof. In the last year alone, the rise in food prices have had drastic political impacts in countries such as Mexico, Uzbekistan, Yemen, and Haiti. Worldwide hunger is growing, and many signs indicate it is only the beginning.

I believe in the importance of eating locally and organically as much as possible, but I no longer believe it is the simple answer to everything. I buy grass-fed beef and organic, hormone-free milk, but understand that this is not an affordable option for everyone. We’re in the beginning of a worldwide food crisis, and continuing to work to improve environmental impacts of farming and keep the productivity of agriculture up is important, both organically and traditionally.

Only good can come out of engaging in a dialogue with farmers. The agricultural community is beginning to be very active in social media and is eager to reach out to consumers one on one. I’ll be taking part in an #agchat Twitter discussion on Wednesday night at 9CT hosted by Cause Matters along with West of the Loop, Self Made Mom, and Honest and Truly. The following week, I will be taking my family on a trip to Iowa next week to visit corn, soybean, and dairy farms. In addition to being regulars at our farmer’s market, these trips and discussions are enriching our awareness of the food we eat and providing an essential education for my kids.

← Buick’s Quest for the Keys Comes to Chicago
Cereal for Dinner: the Ultimate Comfort Food →

One Response to The Uncertain Future of Food