In the month of resolutions and diet talk, I’m going to buck the trend to talk about a fat. And not just any fat. I’m going to talk about duck fat, a decadent, moan inducing substance when coupled with potatoes. Surprisingly, duck fat is supposed to have health benefits comparable to olive oil, but that’s not why I want to dedicate my first 2011 food post to it. I just want to write about it becomes duck fat brings me to a foodgasmic state every time I use it in the kitchen.

If singers and poets wrote about great food pairings instead of great couples, there would be many songs about duck fat and potatoes, a union so perfect that it makes me want to sing, moan, and cry all at once. Duck fat makes sauteed potatoes richer and silkier at the same time, making a fairly mundane dish into a moan-inducing one. Every potato has a delicate crust that yields to a soft slightly sweet center. 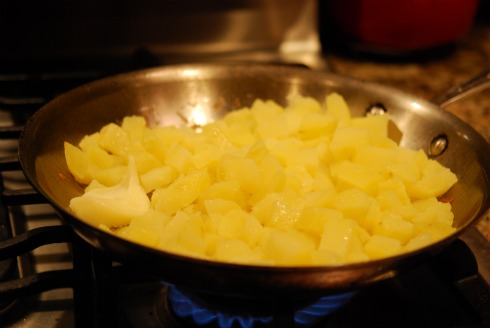 If you happen to run across a container of duck fat in a fancy food shop, grab it immediately! A container will not cost you more than $5, marginally more than a package of butter, but ever so much more satisfying. It will keep for over a month in the fridge. It never hurts to ask either. The butcher at Fox and Obel was more than happy to ladle me a half a pint of duck fat a few weeks ago. It looks like Crisco, white, thick, and glistening with promise.

If your local food shop is not the type to stock duck fat, there are plenty of online sources: 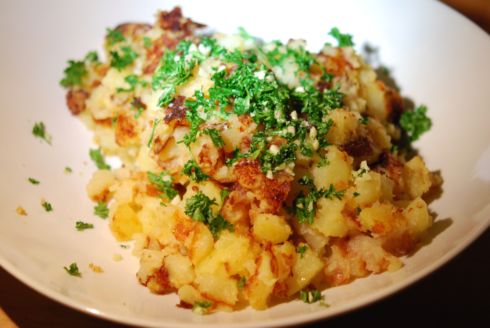 ← >Pinch Me, Was I Dreaming?
>What Are Your Weight Loss Secrets? →

7 Responses to >Duck Fat and Potatoes, a Marriage Made in Heaven