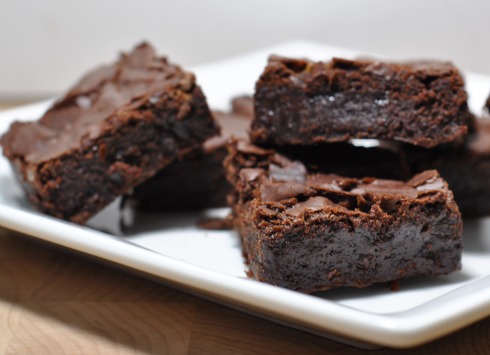 I’ve been using the same delicious brownie recipe for 20 years. I know that statement makes me sound like an old crone, so I should clarify that I started making homemade brownies as a pimply teenager, shedding tears over mean middle school boys while being hypnotized by the sensuous beauty of chocolate slowly melting into butter. Those brownies were rich, fudgy and decadent, and although I tried other recipes over the years, I never found one worthy of replacing our family brownie recipe, until this week, when I got the latest issue of Bon Appetit. 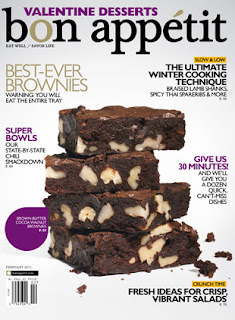 The brownies were right on the cover, in a mouth-watering tower. Only the chunky walnuts marred their perfection. I actually did a quick Twitter poll, asking how people feel about nuts in brownies. The answer was almost unanimous. Most people think adding nuts to brownies are a crime. I completely agree, crunchy nuts just take away from the chocolate.

The recipe is easy to whip up. You can have a warm pan of brownies on the table in 35 minutes.

The brownies are rich and intensely fudgy, perfect to cut into tiny bites of chocolate bliss. Unlike my original brownie recipe, this one uses cocoa powder instead of melting chocolate as the base, but it still sends tendrils of chocolate smells up throughout the house, combined with the betwitching aroma of browned butter. This recipe makes a very small batch, and I had to make it twice to have enough to bring to my book club and have a few leftover for the kids and these pictures.

After making the recipe plain a few times, I had the urge to experiment by adding bits of Skor candy bars. They melted but gave the brownies a hint of toffee and sweet almonds. Seems like a nice compromise to put to bed that whole nuts in brownies debate. 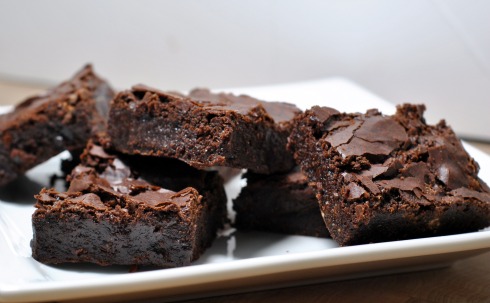 ← >Requiem for Annie’s Ice Cream, our Neighborhood Greasy Spoon
>Snowbound? Settle in for a Cozy Read with Under the Mercy Trees →

5 Responses to >Cocoa Brownies with Browned Butter and Skor Chunks