I’ve had Pyrex pans since I had my first apartment my senior year in college. I didn’t have much money, but I happily plunked down my $10, (two hours of folding Gap jeans perfectly!), in order to own a Pyrex casserole.  How else would I make my sister’s yummiest fudgiest brownie recipe?

I still have that casserole dish today, fifteen years and many lasagnas and brownies later, a much better investment than the $10 frying pan. Considering the same glass as Pyrex is used by NASA on the space shuttle, it’s no surprise that their pans are a virtually indestructible cooking utensil. 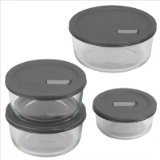 I recently received a few samples of the new Pyrex No-Leak Lids cookware to try out in my kitchen. I quickly became a huge fan. Here’s why:

One Response to >Things I Love: Pyrex No-Leak Lids Bakeware