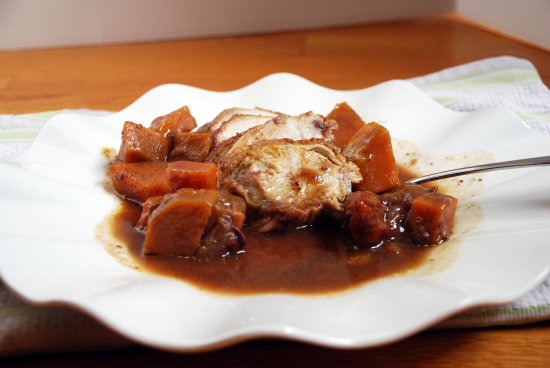 I met my husband at work. I was young, just out of college, and was instantly smitten by this sophisticated New Yorker with his jazzy ties. We were friends at first, wasting countless work hours in whispered conversations in office cubicles, commiserating over our love lives, and talking about food.

Yes, food. I liked his ties, but I fell in love with his appetite and enthusiasm for food. We could talk for hours about great meals, favorite restaurants, and food memories. Our first dates were spent cooking for each other, timidly revealing our cooking repertoire.

Over a decade later, Steve and I are still equally passionate about each other, and about food. Our tastes have evolved, but they’ve evolved in sync. Chances are that if I see something in a cookbook that looks good to me, it will look good to him too. We’re suckers for a sweet savory combination, like Cider Braised Pork Roast.

Last week, I made a chicken dish based on another recipe in the Dorie Greenspan Around my French Table Cookbook, Chicken Tagine with Sweet Potatoes and Prunes. I had never made it before, but I knew, before Steve walked in through the door, that it would be a winner. I used dates instead of prunes, and left out some of the spicier exotic ingredients in the recipe. The resulting dish was the perfect fall dinner, sweet, savory, and a rainbow of golden reds, browns, and yellows.

Not only was it delicious, but it was one of those throw it together and leave it alone to cook dishes, perfect to set up a romantic candlelight dinner.

← >Book Review: Room by Emma Donoghue is a Beautiful Mother and Child Story
>Close Encounters of a Cow Kind →