>I’ve been spending all weekend reflecting about my recent trip with the Iowa Corn Grower’s Association. I’ve stared at the blank blog compose screen, struggling to begin a mega post to share my thoughts on all things corn. I was completely hypnotized by the blinking cursor when I realized that it’s all too much to put in one post. Before I tell you where I stand on all the controversy, I need to tell you about what we did, saw, and heard on the trip, essentially taking you behind the scenes of this well-planned and executed press trip.

Although my trip to Iowa lasted less than 48 hours, it was so packed with experiences that it felt closer to a week. We began both days at 7:45AM and didn’t have a minute of downtime until we parted at the airport for the return trip home. We met many people, heard many stories, had many conversations to really get a great sense of the lives of farmers today. Many of the activities were fun, some, like the laps around the Iowa speedway, were exhilarating, but all served the same purpose: to educate me and the seven other bloggers on the press trip about how corn is grown and to correct our outdated image of farming. As I’ve disclosed before, my flight and hotel stay were paid for by the Iowa Corn Growers’ Association who also paid for all my activities and meals during my visit. 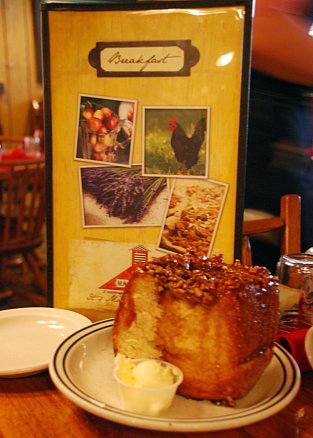 We began with breakfast at the Iowa Machine Shed restaurant, a country restaurant similar to Cracker Barrel  but without the white rocking chairs. It’s a good thing the Iowa Machine Shed is not available on an interstate near me because their giant cinnamon buns with a generous side of fluffy white frosting would become a dangerous addiction.

We ate with a young farming couple, Kevin and Sara Ross and their 10 month old son Hudson. Unlike many of the other farmers we met, Kevin didn’t follow in his father’s footsteps. His father was a computer programmer and his mother was a teacher. He was exposed to farming by his grandparents’ farm. Kevin and Sara own a 650 acre farm in the SouthWest of Iowa where they grown corn and soybeans and raise 80 heads of cattle. They use 550 of their acres for corn and soybean, leaving the other 100 for conservation, cattle, and other crops.

As we all sat around the table, getting to know each other and marveling over the extensive menu, he sat quietly, shifting in his seat, letting his wife and baby do the chatting, no doubt wishing he was in the field bringing in the rest of his harvest. He grew more comfortable when he began describing challenges he faced when he chose to become a farmer, like finding financing to purchase a $300,000 combine to harvest the corn, and purchasing enough land to break even. He described how as a farmer he wears many hats, “Yesterday I was a mechanic all morning, then I spent an hour as a salesman marketing my corn before heading to the fields to bail hay until dark.” He supplements his farming income by selling crop insurance on the side. Regardless of how sophisticated and technical farming equipment has become, today’s farmers still need to protect their families against the weather as best they can. 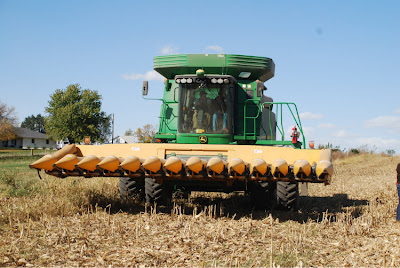 I began my fact-finding mission with Kevin, asking him how much more profitable corn is than other crops like tomatoes and green peppers. He answered that he could probably sell a bushel of tomatoes for more money than a bushel of corn, but that it wouldn’t grow as well in Iowa and that it would require a lot more manpower to harvest and grow so in the end, wouldn’t be as profitable for him, wouldn’t enable him to break even on his farm. 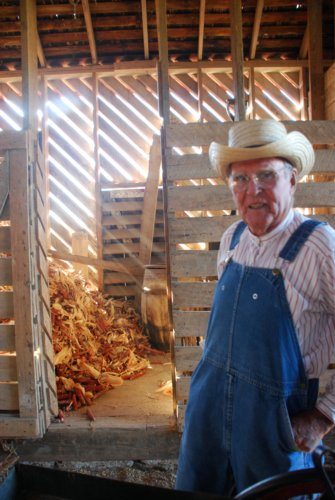 After that small taste of a farmer’s life today and a very filling country breakfast, we headed to the Living History Farms, a farming museum that recreates farming and living conditions in various periods of US history by farming 25 acres of open pollination (non GMO) corn with horses and traditional pesticides. We got a sense of how far farming has progressed in a hundred years. We met Bob, a Percheron work horse that was a popular farm breed in the 1900s, the predecessor to the massive combines now used to harvest corn. We also met Bob, a farmer in his late 80s who talked to us about the many changes he’s seen in agriculture in Iowa, laughing as he recounted the first time some of his neighbors planted soybeans in the 1920s and they used it as hay. As we tried our hand at running ears of corn through a hand grinder, our tour guide Mike talked about many of the effects of the changes in farming technology, stressing that they try to show both sides of the “GMO debate” at the museum. Here are a few of the points he made: 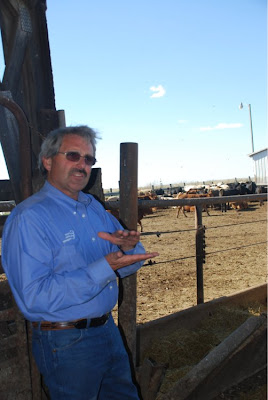 We left the historical farm and traveled to the Couser cattle farm in Nevada, Iowa for a working lunch, set up on tressels right in Bill Couser’s tool barn, a handyman’s dream. As flies buzzed around our heads and cows mewed plaintively in the background, we watched a video about the Iowa Environmental Stewardship Award which Bill Couser won in 2010. The Couser Farm has received a lot of press for being its own sustainability cycle: growing corn and soybeans that he then feeds to his cattle and processes into ethanol in a plant he built and funded with neighboring farmers. The corn that goes into ethanol production serves two and sometimes three purposes, also being made into processed feed and even dry ice. Couser also grows seeds for Monsanto.

Bill Couser stood in front of a 20 foot table laden with corn bi-products produced on his farm, from cattle and hog feed to ethanol, and admitted that he was nervous about speaking to “seven housewives that are bloggers.” He then launched into a passionate overview of how he and his wife began their family farm that began with 24 heads of cattle and a few pigs and now has over 10,000 cattle a year. He touched on many themes including: 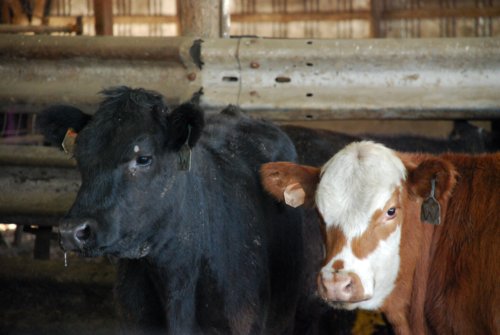 We then headed into the Couser fields to witness the harvest first hand. We sat with two of Couser’s employees as they drove the massive combine through the field, grinding corn into seeds with its futuristic teeth. Each represented a different aspect of the farm industry today. One employee was a retiree from a local plant, eager for the extra cash at harvest time. The other was a recent college grad and a full-time employee on the Couser Farm because his own father’s farm couldn’t afford to employ him on a full-time basis. While he waited to take over his father’s farm, he gained valuable knowledge and experience with Bill Couser. Sitting up high on the machine, feeling its power as it plowed through the fields illustrated the changes in farming vividly. 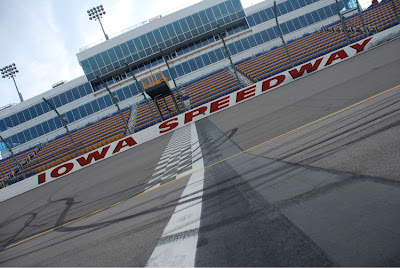 We went from the farm to the racetrack, driving an hour to the Iowa speedway to race around the track in ethanol powered vehicles at 107 miles per hour. I knew little about ethanol before this trip, and I’m still not familiar with all the politics around its use. I was amazed to learn that the gas pumped into our cars already contains 10% ethanol. I thought only Flex fuel vehicles used it. And I was definitely blown away to learn that race cars at many facilities like the Indy 500 use 100% ethanol fuel.

We then took a 20 minute break at the hotel to wipe off the corn dust from our faces before heading out to dinner at a local winery. I was surprised to find that the Jasper Winery grows varietals unique to Iowa such as Seyval Blanc that were quite good and that Iowa had been known for its wines in the early 1900s until its grapevines were wiped out a herbicide in 1946 until recently when wine began making a comeback in the region. We were joined for dinner by Tim and Darla Recker and Kevin Rempp, also Iowa corn growers. They too were open to answer any questions, eager to show us how farming is done today.

I spoke at length to Tim and Darla about hog farming and the process of growing seeds for Monsanto. The Decker family raised hogs in addition to growing corn and soybeans until last year. Because pigs eat mostly corn, the two industries are closely related. When corn prices drop, raising pigs becomes more profitable. But when hog prices drop, as they did steeply 10 years ago to around $5 per 100 pounds, many farms went out of business. Although the Decker Family weathered the drop in hog prices until it came back up, they decided to stop raising pigs because of the toll on their family life. Tim explained to me that a hog farmer’s work is never done and that his wife was tired of being a hog widow. It’s hard to go on vacation or travel to your son’s soccer tournament if you have hundreds of pregnant sows in the barn.

Tim Decker also explained how and why he grows Monsanto seeds, subjecting himself willingly to my incredibly basic questions. He described the secrecy and security procedures when the male and female Monsanto plans are delivered to his farm and how he has to make sure that no open pollination corn crops are within a certain radius near his field for fear that they would corrupt the Monsanto seed. He even described how clean the truck delivering the grown seeds has to be, again to ensure its purity. But when I asked him if he minded growing corn for a fraction of the cost that he would then be paying for it next year when he buys it back from Monsanto, he told me that he felt it was a fair price to pay for all the science and technology they from invest in the seeds as well as the guarantee of their ever growing yields. He also added that another perk of growing Monsanto seeds is that they are harvested much earlier than seed corn, enabling him to stop worrying about the weather a few months earlier, at least for those fields.

Then Tim described to me how he sells his corn, making last minute decisions based on up the minute bids sent to his cell phone as he sits in his combine having just completed his harvest for the day. Hearing how he watches the daily price fluctuations to decide whether to send that portion of his harvest “down the river” to China and other overseas markets, to a local ethanol plant, or to other domestic uses completed my new mental image of today’s farmer, banishing my Norman Rockwell mental image of pitchforks and replacing it with satellite technology and college degrees.

After dinner, we went back to the hotel and collapsed into bed. The next day began again at 7:45 for a heated discussion about nutrition with Dr. Ruth McDonald, Department Chair of the Food Science and Nutrition Department at Iowa State. This breakfast was the most heated portion of the trip. I’ll talk more about that in a separate post about High Fructose Corn Syrup tomorrow. We then headed to the Ador Cooking School to cook together, farmers, PR team, and bloggers working as a team to put food on the table, fittingly bringing our experience back to the table, to the food that we eat every day.

← >The Recipe Club Novel Inspired Me to Cook and Reconnect
>Wordless Wednesday: Happiness Can Be Sneaky →

3 Responses to >Breaking Down the Iowa Corn Trip