>I was looking for a casual and easy appetizer to serve this week for Rosh Hashannah dinner, beyond the traditional sliced apples and honey. I ended up making these corn cakes with applesauce, literally pan frying them up as my guests walked in the door. They were everything an appetizer should be: easy, yummy, and fun. I’ll definitely be playing around with these little corn cakes with different toppings like shrimp and creamy mushrooms. 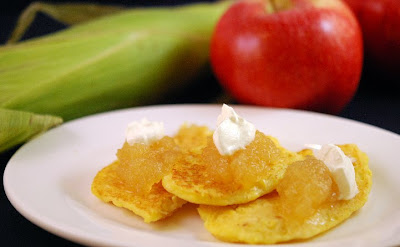 I had never made corn cakes before, and I found the inspiration to use the farmer’s market corn cobs in a very different way in a fairly unexpected magazine: the New York Times Sunday Magazine.

I don’t generally read the New York Times Magazine for the recipes, but this week, one caught my eye: the Corn Cakes with Caviar from the 1985 article by Craig Claiborne. The decadent recipe from the Reaganomics era was reinvented as an homage to local comfort food by Mark Fuller, a Seattle Chef as a corn pudding topped with shrimp. I decided to reinvent it (again) as a comfort food appetizer with twice sweet honey and maple syrup apple sauce.

Twice-Sweetened Apple Sauce (I made this very sweet because of Rosh Hashanah – you may want to cut back on the honey and maple syrup)
Ingredients:
6 apples, peeled and roughly chopped
3/4 cups of water
1/2 cup honey
1/4 cup of maple syrup