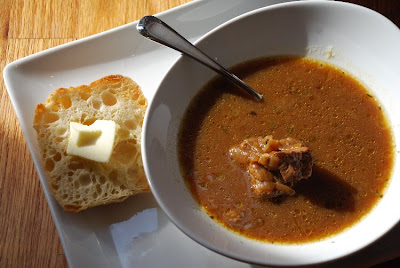 French onion soup is one of those quintessential comfort dishes, a deeply satisfying brown savory broth topped with a decadent crust of rich melted cheese. Although you’ll find it on French menus, it’s much more likely that an American will order it rather than a French person. When a Frenchman is craving une bonne soupe, it’s much more likely that he’s imagining a simple potato leek soup or a cold vichyssoise. But both tourists and Parisians will agree that this simple soup is delicious.

The weather was gray and misty today, so I decided to welcome Steve home from coaching Bella’s soccer team with a big bowl of French onion soup. I used a recipe from the Cafe Boulud Cookbook which has a wonderful mix of traditional French and American-French fusion recipes,which never fail to inspire me. His recipe called for substituting toasted baguette topped with marrow for the customary melted cheese topping and adding beef shank to the soup for a little extra substance. I boiled the marrow bones according to the recipe, but they yielded gray, totally unappetizing marrow. Instead, I served the rich soup with toasted bread topped with melting lumps of salted butter. It was much lighter than the customary cheese, more subtle and just as delicious. It would have been nice if the marrow had worked out, but a generous pat of butter topped with a little crunchy Fleur de Sel easily made up for my disappointment.

The house smelled great from the caramelized onions long after our soup bowls were licked clean. My mouth was tingling from the rich flavors, but I didn’t feel overly full. I have a feeling that this lighter version of French onion soup will be a staple in my fridge as we deal with our first brutal Chicago winter.

3 Responses to >a Lighter Take on French Onion Soup