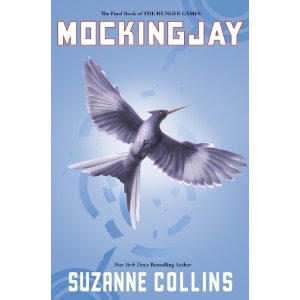 I spent most of last week stalking the mailman, eagerly awaiting the delivery of my review copy of Mockingjay, the final book of the Hunger Games Trilogy. When it finally landed on my front porch with a satisfying thump, I didn’t waste any time diving into its pages. Mockingjay didn’t disappoint, delivering a thrilling a story packed with thought-provoking ideas about our dependence on media and our faults as a human race, just like the two previous books in the series.

Last year, all the buzz was about a little series called Twilight. Everyone I knew was suddenly raving about these books, complaining about being completely addicted, and falling into a deep trance while reading them.

This summer, there’s a new hot trilogy called the Hunger Games by Suzanne Collins that’s causing the same sleep-deprivation in its readers, even without the allure of blood-sucking vampires. The series is set in the not so distant future, after America has been ruined by civil war and replaced by the brutal nation of Panem. The country is divided into twelve districts, and ruled by a wealthy elite living in the capitol in the Rocky Mountains. Each district operates a different industry, such as farming, textiles, or electronics. All goods are funneled to the capital and then doled out in scarce quantities to the outlying districts. The protagonist, a young teenage girl named Katniss Everdeen, lives in the mining district, and supplements her family’s meager rations by poaching in the woods outside the electric fence. The capitol maintains its tight control of the Districts with a ruthless police force and by holding a well-publicized event every year: the Hunger Games.

Once a year, the capitol dispatches officials to each district to select one boy and one girl between the ages of 12 and 18. Everyone is forced to watch as the contestants’ names are picked from a giant bowl, lottery style. The event is, of course, broadcast nationwide, as it is filled with dramatic tears from the parents and family of the chosen children. Occasionally the drama is increased when older siblings or friends step in to volunteer themselves instead of the chosen contestants. Each chosen child is then dispatched to the capital to prepare for the Hunger Games.

This is reality TV taken to the ultimate level because instead of merely fighting for fame and fortune, the competitors are fighting for their lives. In a large arena, the children will literally fight to the death as the entire nation watches live over the next few weeks. The arenas are different every year, sometimes jungle, sometimes desert, and filled with audience pleasing deadly tricks such as poisoned berries, attacking birds, and acid rains. Contestants can even be sponsored by corporations and districts, sending them food and weapons to aid them in the competition. The parallels to our fascination with shows like Survivor and the Biggest Race are impossible to miss. And indeed, as I read the Hunger Games, I found myself getting as addicted to the action as I did while watching Survivor, but hating myself for it all the more.

As you would suspect from the title of the book, Katniss becomes a contestant after she volunteers to take the spot of her baby sister. As you can imagine, the novel is thrilling as we see the Hunger games through her eyes, an underdog from a weak district. It’s part Lord of the Flies, with children revealing the basest part of human nature, and part comign of age story, as Katniss discovers her values and her humanity while fighting for her survival.

Catching Fire and later Mockingjay pick up where the previous stories left off, with the growing rebellion against the oppressive capitol regime and its evil President Snow. The thrill and pace of the story never lets up, til the very last page, and constantly provoking the reader into imagining what compromises he or she would make in a similar situation. I loved the Hunger Games because it plunged me into its cruel world with its murderous genetically-altered creatures and its lethal politics. Suzanne Collins has created a world as rich as the Harry Potter series, one that will drift into your dreams, but she’s also written an important novel that will help teens and adults alike realize how much power we grant to the media. Although this series is becoming as much of a fad as Twilight, it’s one with much more substance.

I highly recommend it.

← >Three Services that Made our Move to Chicago Stress-Free
>If We Cook It, They’ll Come →