>The quiet ones are the dangerous ones. 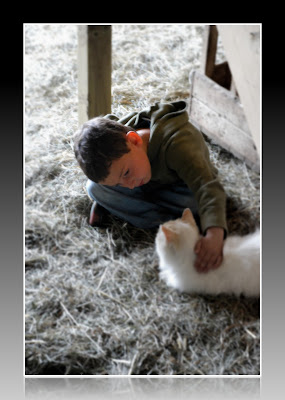 Every few days, my daughter Bella comes running home from school, full of swagger and confrontation, to demand, “When, just tell me when, are we FINALLY going to get a dog!” She writes essays and poems about different dog breeds and leaves me little notes promising to scoop poop in the rain. For the poetry contest at school, she even found a poem entitled “Mother Doesn’t Want a Dog” that she acted out in front of all the second grade classes. She is executing a flawless PR campaign.

But Jack’s attitude is the one that really sways me.

He doesn’t say much about getting a dog. He doesn’t hound me. Doesn’t beg and plead. Doesn’t resort to tears of frustration over my delaying tactics. He doesn’t need to.

Jack is a whirling dervish from dawn to dusk. He throws things. He shouts just to hear how loud he can be. He kicks things. He’s constantly manning up, deepening his voice, trying to act as tough as the big boys on our street. Except with animals.

This picture was the second time I caught him unaware with an animal. The first time was during a trip to the animal shelter when he fell in a trance in front of a black lab named Echo. He had the same look on his face: so naked, so kind, so compassionate. It was like getting a glimpse into his soul. That peaceful face is enough to melt all of my reservations.

Happy Wordful, not so Wordless and Way-back wednesday!

7 Responses to >the Quiet and Dangerous Ones