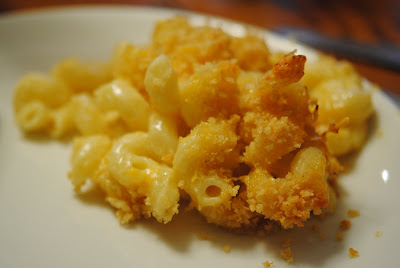 A deplorable thing happened over the course of the year, something I’m ashamed to admit. My kids got addicted to Kraft macaroni and cheese. That skinny blue box with its vibrantly yellow elbow noodles became their definition of a good lunch. Discovering the orange day-glo noodles in their thermos would result in happy squeals, spontaneous dances, and heartfelt declarations that I was the best mom in the entire world.

This did not give me the warm and fuzzies.

So I retaliated by banishing the mac and cheese, but they cried and they moped, and they said that lunch was not the same without it. Then I set out to show them real mac and cheese, filled with real milk, real butter, and a glorious mix of three cheeses, fully expecting a hardcore smackdown. Whenever they’ve encountered the real deal in restaurants, they’ve always turned their noses up at it, declaring it too cheesy, too creamy, just not mac and cheese.

But I was determined to try. I couldn’t keep on calling myself a foodie and see bright orange moustaches on my children’s faces.

I gave the cheeses some serious thought before going to work. I wanted to steer clear of processed cheeses like Velveeta, but didn’t want too strong a taste to turn off the kids. I settled on a blend of French Gruyere, Etorki and Kraft sharp cheddar. Both Gruyere and Etorki were my French contributions to the project. I only recently starting snacking and making grilled cheeses from Etorki after receiving a big chunk of it as a sample from Ile de France Cheeses, it’s a pleasant, semi-soft sheep’s milk cheese that is relatively inexpensive and can be found in many supermarkets. You’re probably more familiar with Gruyere, a classic French Swiss-style cheese that is yellow, hard and riddled with holes. And you’re undoubtedly familiar with cheddar.

I was kind of dreading grating all that cheese, but the work went more quickly than anticipated, and I found the sight of all those gently falling cheese curls oddly therapeutic, like a very beautiful and pleasantly fragrant snow. The rest of the recipe came together very quickly, filling the house with the mouth-watering smell of toasted bread crumbs, cheese, and pasta.

Thirty minutes later, it was show time. I placed the steaming casserole on the table in front of three skeptical faces. “This doesn’t look like the mac and cheese we like…” Everyone tried it, and two out of three gave it a thumbs up and had seconds. The third conceded that he didn’t hate it.  Majority rules in my house. It’s official, Kraft mac and cheese has been kicked to the curb and I can now call myself a foodie mom once again.

This was delicious right out of the oven, and then every day for lunch for the rest of the week.
← >5 Kitchen Gadgets I Can’t Live Without
>the Ultimate McCormick Cupcake Decorating Giveaway →

6 Responses to >How to Host a Macaroni and Cheese Intervention