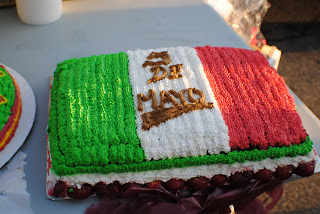 The Columbus food scene never ceases to surprise me with its diversity. When we moved here last summer, I braced myself for date nights at Applebees and TGI Fridays. Instead I was delighted to discover a rich food scene with markets filled with artisan foods, authentic Japanese restaurants, and locally-made ice cream in a bevvy of creative flavors. (And you can now get any of the incredible Jeni’s ice cream flavors shipped to your home anywhere in the US – Salty Caramel, Goat Cheese with Roasted Red Cherries, Pear Riesling, Wildberry Lavender are just a few…) I’ve been eating like a queen ever since I got here.

Last night, Columbus took me by surprise again when I finally tried first hand its elaborate network of taco trucks. 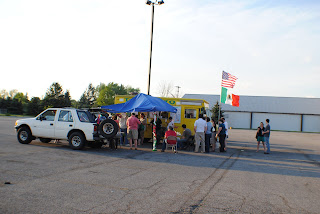 You might be surprised to learn, as I certainly was, that Columbus is home to over 30 taco trucks. They seem to be sprinkled throughout the outskirts of the city. Although they initially catered mostly to the hispanic population in Columbus, a group of enthusiastic foodies formed the Columbus Taco Truck website and have dedicated themselves to spreading the word to the general population.

For Cinco de Mayo, Jim, Bethia, and Andy, the masterminds of the Columbus Taco Truck movement, organized a meet up at Taco Nazo. Groups of people filed in throughout the night, greeting each other before stepping up to the truck to order their dinner. Many of the attendees had biked in from Columbus in full spandex attire to enjoy a dinner of authentic Mexican food. As the sun set, they jumped back on their bikes and sped away home.

I’ve been a faithful reader of Jim’s blog since I first moved here, and he graciously responded to one of my comments by offering to give me the rundown of the Columbus taco trucks. I’m not sure I would have had the chutzpah to explore these unfamiliar parts of town on my own, not knowing about the safety of the neighborhoods or the quality of the food. 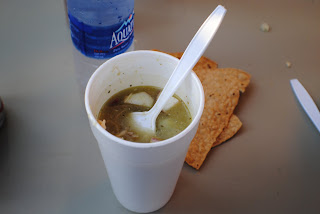 I was blown away by the food. When there is no decor, no tables, no music, the food has to stand on its own. And it did. I expected to be overwhelmed by the spices, but instead my mouth was zinging with flavors and freshness. We began with the Cinco de Mayo special: a green posole stew served with some crunchy tortillas and your choice of onions, lime and radishes as garnish. It packed just a little heat and was filled with generous chunks of dark chicken meat. Usually stew satisfy, coating the mouth with rich sauces, but this one woke my senses up, and made me eager for more. 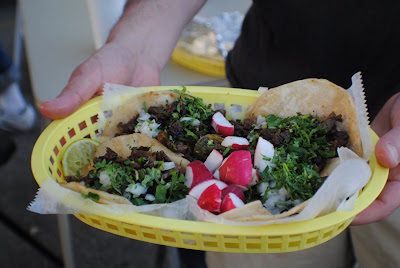 Then we continued our tasting with a chicken burrito and some steak tacos. The tacos were my favorite. The meat was charred with spices but tender and flavorful. The tortilla was soft and tasty, unusual for something that usually goes unnoticed. And the taco was topped with a generous amount of vibrant green cilantro and lettuce and ruby red radishes. I topped it with some hot sauce and every bite. This morning I woke up craving more.

After just one visit, my taste buds are hooked on what the taco trucks are selling. I spent the night talking to other converts like Bear of Slow Food Columbus and Mandy of Wild Goose Creative, hearing about the taco truck with amazing roast chicken and the one that serves ice cream. Those trucks are apparently located on the West Side of Columbus and that’s where I’ll be headed next.

Leave a Reply to Fresh Local and Best Cancel reply