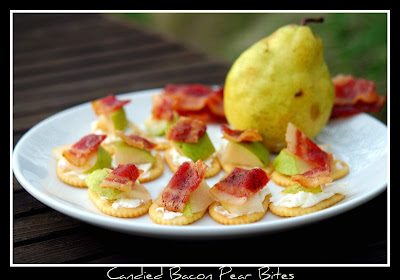 I became obsessed with candied bacon as soon as I first heard about it. Caramelizing bacon, improving on such a delicious treat, seemed just too good to be true. And then I tasted candied bacon, and realized that it was just as good as it sounded, an ideal combination of sweet and salty.

As it was so delicious, I assumed it must be a pain to make, a special dish that could only be mastered by great chefs. But when I saw it made at the Pillsbury Bake Off by Stephanie Lemur, I realized that whipping off candied bacon at home is easier than frying regular bacon. It was such a beautiful epiphany that I almost cried.

Last week I had my book club over and I whipped off a little appetizer inspired by my favorite Pillsbury Bake Off dish: apple and candied bacon canapes. I substituted pears for apples, crackers instead of pie crust, and simply used cream cheese instead of a blue cheese/cream cheese blend. These little pear bites disappeared quickly, and I had a tough time keeping a straight face free of gloating when people asked, “What did you do to this bacon? This is the most delicious thing I’ve ever had!”

Telling them it was candied bacon was almost as delicious as eating it. 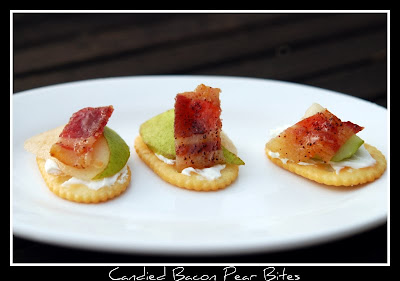