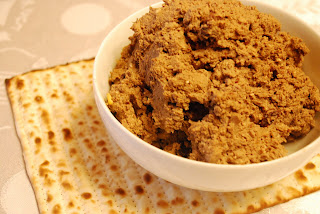 My favorite part of the Passover meal every year is the chopped liver. I know that it’s not a favorite of many, but I love this savory spread with a passion. It could be that it reminds me of the pates of my native France. It could be because my mother always fried up the chicken livers just for me whenever she roasted a chicken. Or it could just be that chopped liver is good, really, crave-inducing good. I have no shame, happily taking a third or even a fourth helping every year.

When we lived in New Jersey, I always bought my chopped liver from Artie’s Deli on the Upper West Side. After much sampling from Zabar’s and other Upper West Side institutions, Artie’s came out as the clear winner with it’s soft texture and lack of bitter aftertaste.

This year, when my Google searches for “Jewish delis in Columbus selling chopped liver” came up empty, I decided to make my own. I was amazed at how easy it was! I took the basic recipe found online and spiced it up to my liking. Some recipes called for sauteing the livers in schmaltz (rendered chicken fat) but I’m a Frenchie so I used duck fat instead. Any fat will do, including vegetable oil or butter. Good Jewish food is not good diet food, and this is no exception.

Call us sacrilegious, but Steve and I officially declared my chopped liver recipe as good as Artie’s.