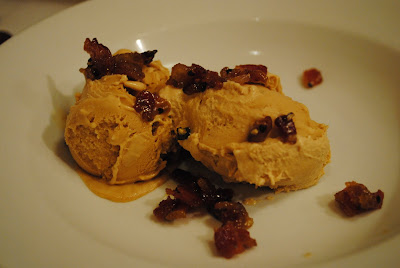 I have a high tolerance threshold for organ meats of all kinds. I love sweet breads, liver, and, although I haven’t eaten since I was a child, I have fond memories of eating lamb brains. I don’t think they sell them anymore, ever since the mad cow disease epidemic, but I can still taste their nutty sweetness melting on my tongue.

As soon as I heard that Chris Dillman was giving a demonstration class at the Hills Market where he would be cooking many pig extremities, I signed right up and began counting the days. I heard that a pig’s head and a pig’s foot would be involved, and I was ready. Chris is a master sommelier in training and works at Sage Restaurant in Columbus. He is also the husband of Lisa Dillman, the author of Columbus’ beloved Restaurant Widow blog, who recently received an accolade from Anthony Bourdain for her knowledge of the restaurant scene. The two know so much about food, and are such a lovely, unassuming couple, the type of people I would love to sit at dinner with under a Tuscan sky late into the night.

He demonstrated how to make a pate from the pig’s head, how to stuff a pig’s foot, how to braise pig’s cheeks, and how to candy bacon to serve for dessert. Everything was absolutely delicious.

The Pate Tete de Cochon was rich and tender and well paired with a light salad. It tasted more like rillettes than pate, and I could have licked my fingers. I don’t think that I’m brave enough at this stage of the game to handle a pig’s head at home however, but perhaps with a glass of wine I may find the liquid courage to reproduce it.

The Pied de Cochon Farci (stuffed pig’s foot) tasted just like a sausage with a tough casing. It was good, but not as memorable as the pate. My most significant takeaway from this part of the demo was caul fat. Chris held up a footlong section of caul fat, strangely beautiful like an elaborate lacework. He then wrapped it around the pig’s foot before sauteeing it. The caul fat melted away, coating the trotter in a delicious flavorful coating. Chris suggested wrapping the caul fat around a steak for a delicious addition. It’s tough to find, especially in small quantities, but you can beg your local butcher for it or order it in 5 pound lots at Heritage Foods. 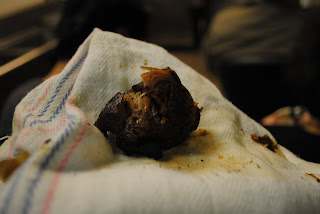 The pig’s cheeks is what I walked away really excited about. Chris passed one around so we could feel the elasticity and tenderness of the meat. It took a lot of restraint to not bite into it right then and there. This is a meat that I long to experiment with and have less courage to muster to do it. I can’t wait to see the look on my Whole Foods butcher’s face when I request it during my next shopping.

For dessert, we had Jeni’s salty caramel ice cream with candied bacon bits. It was out of this world… truly the perfect pairing. I will include the recipe for candied bacon below. This would be a knock their socks off dessert for any dinner party you’re having and would go well with Dulce de Leche Haagen Daz if you don’t happen to have Jeni’s ice cream in town.

3 Responses to >Candied Bacon Over Caramel Ice Cream: For the Love of Swine with Chris Dillman