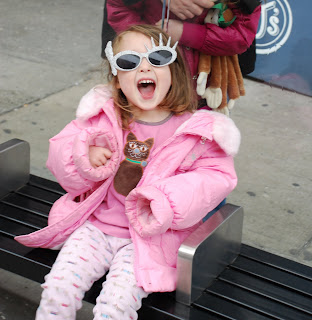 She had spotted the glasses as soon as we walked into the souvenir shop. And she’d known right then and there that she had to have them. She tugged and pulled at my sweater until I lifted her high enough to wrap her little pudgy fingers around the plastic frame.

They were huge. They were heavy. They fell off constantly. They rained a trail of silver sparkle on anything in their proximity.

But she didn’t care. They were perfect. She wore her Statue of Liberty glases “with the crown on them” all weekend.

And when the shopkeepers, taxi drivers, elderly ladies, construction workers, and hotel staff began greeting her with “Hey there princess!” she just smiled. She had been expecting it. She’d known she was a princess all along. The glasses were just the clue the rest of the world had needed to greet her appropriately.

9 Responses to >Hey There Princess!