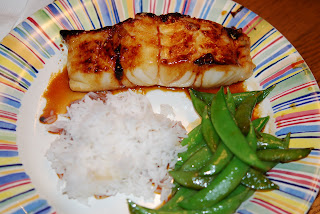 I love Asian flavors, but I don’t often cook with them. My comfort zone is more in the heavy cream and butter zone of the kitchen. But I love it when a cookbook inspires me to get out of my saucy French habits, and play around with more exotic flavors. It’s really about letting go of my fear of embarrassment that I won’t be able to find the lemongrass or the seaweed shreds in the produce aisle.

When I went to BlogHer Food this summer, I went to a wonderful party on the last night that was organized by a trifecta of amazing food bloggers: Jaden from the Steamy Kitchen, Elise from SimplyRecipes, and Ree from the Pioneer Woman. These women are my inspiration, the golden standard of food blogging. I would have been content to simply sit next to them on a bus, but the party was a dream come true: intimate with great music and decadent food everywhere. And when the guests walked out, each received a foodie dream swag bag. Tucked into said swag bag was a postcard to receive a copy of Jaden’s The Steamy Kitchen Cookbook

I promptly popped the postcard in the mail, and forgot about it. A few weeks ago, I received my copy of the Steamy Kitchen, and I instantly began drooling. With the gorgeous color photos of fish and meat glistening with brown sauces, the drooling is inevitable. But as soon as I tore my eyes away from the pictures and began perusing the ingredient lists, I breathed a sigh of relief. These recipes were completely doable, with short lists of ingredients.
The Steamy Kitchen Cookbook was exactly what I needed: Asian cooking, demystified.
I decided to jump right in with the Grilled Fish with Kabayaki Sauce. I literally wanted to lick the picture on the page. And once I made the sauce (it took less than 10 minutes), I was able to lick the spoon to my heart’s content. The recipe is an adaptation of that Japanese grilled eel with sweet soy glaze that you sometimes get in sushi restaurants. As eel is hard to find in our supermarkets, Jaden suggested using catfish instead. I chose to indulge in Chilean Sea Bass instead because I love how it tastes so much like lobster.
Grilled Fish with Kabayaki Sauce (adapted to serve 2)
Ingredients
for the Kabayaki Sauce:
1/2 cup of soy sauce (125ml)
1/2 cup mirin (Japanese sweet rice wine) (125 ml)
3 tablespoons of sugar
For the Fish:
1 tablespoon of high-heat cooking oil (I used vegetable oil)
2 firm fish fillets, about 6 oz each, patted dry (I used a large Chilean Sea Bass filet cut in half)
6 cups of steamed short-grain rice
one small handful of dried or toasted seaweed shreds (Kizami Nori), for garnish (I omitted)
2 tablespoons of thinly sliced green onions (scallions), for garnish
I served this with lightly sauteed sugar snap peas and rice.
← >A Painful Write of Passage: Riding the Bull
>9 Hours, 4 Movies… Pure Bliss →