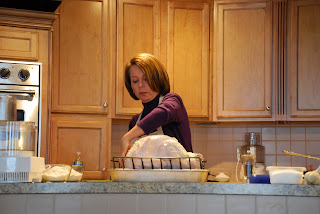 On Sunday, Steve and I headed to the North Market for a special Thanksgiving Boot Camp cooking class with Robin Davis, food editor of the Columbus Dispatch.

We were excited to take a cooking class together, our first in a few years, and were eager to get some tips from an expert to improve our Christmas turkey (at Thanksgiving we are sous-chefs in Steve’s Mom’s kitchen). But mostly, we were just giddy to have Thanksgiving early. After all, since Halloween was early here, it made sense that Thanksgiving would be early too. 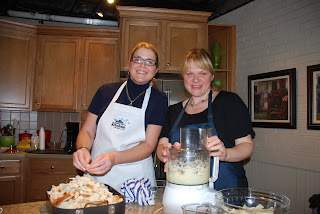 This was the first hands-on cooking class at the North Market (other classes were larger demonstrations), and it was intimate with just six students to keep it manageable. And two of those six people turned out to be no other than Amy Turn Sharpe from Doubleh-vay and Diane from Momo Fali, two Ohio mom bloggers I had been chatting with via Twitter but had never met IRL. Needless to say, I’ll be stalking these two very cool women in the very near future in my quest for local friends.
In a group this small, there was no place to hide, and no time to waste with chit chat, so we got down to work. 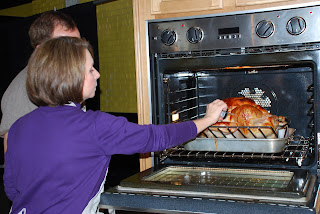 First we watched Robin vigorously rub a gorgeous turkey with some butter and spices. As she massaged the bird, we talked brining. Steve and I both grilled her about our past brining failures and we concluded that our mistake had been brining for too long, for 24 hours rather than just 12. Our salt to water ratio was also probably off, because we used a container that was too small. We walked away with a huge 5-gallon painter’s bucket that we will line with a garbage bag for our next brining experiment.
Per Robin, the basic brining solution should be: 2 1/2 gallons of water, 1 3/4 cups of kosher salt, 1 cup of sugar. (Note that kosher salt and table salt are not interchangeable. Table salt is much saltier.)
She then decisively popped that turkey in the oven, doused it with apple cider and we moved on to our next task, coincidentally another big failure of mine: pie crust.

The pie crust ingredients were similar to mine, so it wasn’t until the rolling out part of the process that I figured out my problem: the motion. Over the years, I adopted what I thought was stud-baker motion, going back and forth a few times in all directions before spinning the dough to repeat the process. As soon as Robin convinced me to resist the urge to rock my rolling pin back and forth, my pie crust began rolling out beautifully.

And after all the cooking was done, we sat down to eat. The bird tasted as beautiful as it looked, and the gravy, with its subtle sweet apple overtone, was amazing. You can find the recipe at Robin’s Dispatch blog, just douse the turkey with cider instead of broth. 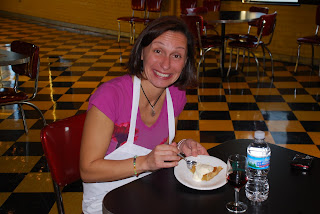 But my favorite part was the dessert: pumpkin pie. Believe it or not, I had never tasted pumpkin pie before. Our Thanksgiving table is always so filled with so many delicious options that I always bypassed this distinctly American dessert. But after tasting this silky and delicately spiced dessert, I won’t be skipping over pumpkin pie anymore.

To make crust:
Mix flour, sugar and salt in a food processor. Add butter. Pulse until coarse meal forms.
Gradually blend in enough water to form moist clumps. Gather dough into a bowl; flatten into disk. Refrigerate 1 hour or up to 2 days.

Position rack in lower third of oven. Preheat to 425 degrees Fahrenheit. Place a baking sheet in the oven while it heats.

Roll out dough on a lightly floured surface to 13-inch round. Transfer to a deep dish pie pan. Fold edges under and crimp, forming a high border.

Reduce oven temperature to 350 degrees. Bake until edges are puffed and center is set, about 45 minutes. Cool. (Pie can be made 1 day ahead. Cover and refrigerate.)