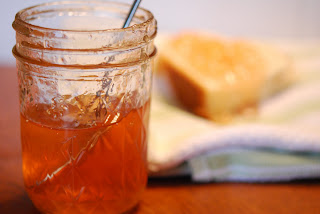 My mother loved making jam, or confiture as we called it. She would gather whatever was falling from the trees at her mother’s house in the country and pile it in the trunk of our car for our pilgrimage back to our apartment in Paris. The next afternoon, while my sisters were napping, we would break out her impossibly heavy copper saucepan and get to work.

I don’t remember much about the process beyond mountains of white sugar and delicious smells wafting out in big gusts of smoke out of that witch’s cauldron. What I do remember with supernatural clarity is the intensely sweet and fruity taste of the hot and liquid jam she would spoon into my mouth during the cooking. The flavor inside my mouth was intoxicating, a million times better than the sweetest candy.
I’ve never attempted to make jam since those days as a child. I was daunted by the memory of back-breaking labor and hours of toiling around boiling substances. But this fall, enticed by the dazzling rainbow of apples at farmers’ markets and Whole Foods, I decided to give it a try.
I consulted a number of online recipes (including the gorgeously photographed Jasmine Cuisine) for “gelee de pommes” which sounds much more exotic and gourmet than apple jelly. The big difference between the French and the American recipes was the absence of pectin.
The French bakers recommended leaving the apple skin and pits in to contribute natural pectin. The process requires longer cooking time, but the resulting flavor and color will be much more intense. However, I should disclose that some of my jars are a little bit runny, even after over an hour of cooking.
My husband was a bit mystified by this entire project, questioning my motivation to make something as “boring” as apple jelly but after watching me moan with pleasure after spooning a little hot liquid into my mouth, he pronounced me completely insane. It wasn’t until he took a bite of the finished product that he understood. He has since been putting my “gelee de pommes” on everything from toasted bagels to cold chicken.
Gelee de Pommes (Apple Jelly)
Ingredients:
4 1/2 pounds of quartered apples – use a variety but make sure they are all sweet
2 lemons
8 cups of water
5 cups of sugar
← >When Did Halloween Become a Training Ground for Girls Gone Wild?
>Halloween Sneak Peak →