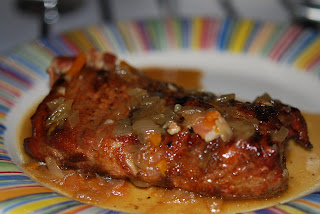 Chefdruck’s Tasty Tuesday
I love to turn to cooking magazines to get inspired to try new techniques or ingredients. This week, I’m experimenting with some recipes from the June/July edition of Fine Cooking. Their meat guru Bruce Aidells has a feature article all about using your barbecue to do double duty to both sear and braise meat. The article featured many different types of meat, and the pictures were so appetizing, I wanted to lick the page.

Last night, I tried the Barbecue-Braised Country Spare Ribs with Beer and Mustard Glaze. This was definitely not a recipe in the quick and easy category, but the end result, tender meat infused with smoky flavor sitting in a complex rich sauce, was delicious.

I was particularly proud because I used homemade chicken stock that I made by throwing the carcass of a chicken I roasted last week in water with a few veggies. This is one of the many budget saving ideas I got from the BlogHer foodblogging session I attended.

The technique calls for first searing the meat on direct medium heat on the grill and then braising it on indirect heat for a few hours before giving the meat one last sear to caramelize the tender meat. Later this week, I’m planning on trying the Barbecue-Braised Bourbon Beef with Mustard Glaze.

Of course, I underestimated the amount of time to make the recipe and we ended up sitting down to dinner at 9:30PM, Spanish time. I would suggest doing the recipe the day before, or on a lazy Sunday at home to not run into the same problem.

Barbecue-Braised Country Spareribs with Beer and Mustard Glaze (liberally adapted from the Fine Cooking Recipe)
Ingredients:
For the ribs:
3 lb country sytle pork ribs (the Fine Cooking recipe called for bone in. I could only find boneless. Finding bone in ribs would be better)
1 Tbsp of paprika
1 Tbsp of brown sugar
1 Tsp of dry mustard
liberal sprinkling of salt and sugar

For the glaze:
1/4 cup of Dijon mustard
1/4 cup of brown sugar
1 teaspoon of Worcestershire sauce 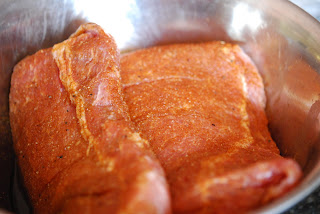