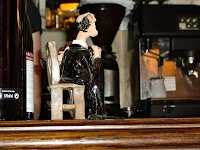 When you’ve been waiting to return to Paris for 3 years and you only have 4 nights there, the pressure is high. It would be a significant challenge to just select a few restaurants from the thousands with amazing food in this culinary mecca on food alone, but we had another, much more difficult criteria to consider: kid friendliness.

Paris, unlike Spain and Greece, is not one of those cities where they dote on children. Their attitude is definitely that children should be seen and not heard, and if you’ve ever dined anywhere near my adorable monsters, you will concur that my children are heard long before they’re seen.

We actually did pretty well for our first three nights out. The first night, still reeling from the long flight over, we opted for a very touristy fondue restaurant. The second night, we wandered around the hip neighborhood around our apartment and found a welcoming brasserie table on the street. We sat like true Parisians, checking out the hordes walking past our table, eating foie gras and drinking a lovely white Bourgogne while the kids devoured the fresh cut baguette. After we all feasted on the most buttery filet mignon cut we’d ever had along with some crispy salty fries. After dinner, we strolled the streets in search of the best sugar crepes in the neighborhood.

Our third night, we took on our first serious challenge when we headed to l’Entrecote, without a doubt our favorite restaurant in Paris, the one place we were determined not to skip. L’entrecote is an extremely popular restaurant which serves the same thing to all the patrons who stand on line to be admitted: salade au noix, sliced steak with a mysteriously addictive green sauce, and the best fries anywhere. Once you do get a seat, the waitress only asks you one question, “Quelle cuisson?” (What doneness?) We were on line before the doors opened and were seated quickly. The kids loved the food as much as we did. We left exhilerated by our successful dinner.

When we headed out for dinner for our last night in Paris, we were downright cocky, still high from our success at l’Entrecote. Steve and I had visions of glorious seafood platters and we boarded a taxi with the kids to a seafood restaurant recommended by our Paris with Kids guide for its excellent seafood and its 12 EURO children’s menu. The quick cab ride was incredibly long, and we finally arrived in a very residential neighborhood. The first warning sign should have been the uniformed valet guy who opened our taxi door and gawked at our troop of children, but we ignored him and marched into le Marly.

The maitre d’ was the second one to gawk. He seated us though and promptly distributed our menus including the kids’ which were now 19 EUROS per child for a choice of pan seared tuna or hamburger (19 EUROS is roughly $25 – that’s a $25 hamburger!). The prices on the rest of the menu were exorbitant, including the seafood platter we had dreamed of: 99 EUROS for two. Thankfully, the service was so slow that no one came to our table to take our drinks order for 10 minutes, just long enough for me to convince Steve to pack up our stuff and head out.

The minute we stepped back out in the Parisian spring evening, I felt calmer, knowing we weren’t about to have a $400 meal with the kids. We headed back to the heart of the Quartier Latin, planning to just find a good but more casual restaurant.

We selected a little restaurant that looked authentic, right outside the Shakespeare & Company bookstore, across the street from the Loire. I approached the owner nervously, asking if he had a table for 5, including 3 children. It was now 8:30, prime time dining hour. He seemed friendly enough, and even asked whether we wanted an indoor or outdoor table. I told him we didn’t mind, we just didn’t want to be in the way with the kids, but he insisted that we choose.

So I chose. I asked to be inside.

Turned out to be the wrong answer.

As I was settling our bags under the table in the corner of the restaurant, Juliette was the first to get up on the banquette. Only she didn’t sit. She stood up, reached up, and grabbed a porcelain statuette of a little man sitting on a chair.

I didn’t see any of this. All I heard was the host, actually the same little man represented in the porcelain statue, yelling, “Non! Non! Non!”

I looked up, and grabbed the porcelain out of Juliette’s hands just in time and handed it to him.

He thanked me, and then turned to Juliette and said, sternly, “Alors toi, assez. Si tu te releves, je te batterai moi meme!” (You, that’s enough. If you get back up again, I’ll beat you myself.)

You would think that I would have stormed out, yelled at the man, made a scene, but I did none of the above. Instead, I translated his threat, word for word, to my spellbound children until they finally believed me. And then we all had a very quiet, very peaceful dinner with some very well-behaved children.