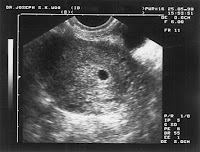 I scrawled this shakily-written caption next to my belly on a photo to announce the birth of my first child. I handed it to my mother in law the minute we walked into their house; thrust it into her hands before we even hugged hello.

I was only six weeks pregnant but I thought keeping things a secret was a silly superstition. I couldn’t wait to share my good news.

At first my mother in law didn’t understand what I was showing her. She put it down on the counter, but I picked it back up and read it out loud. As soon as everyone understood that I was pregnant, we all started hugging and dancing around, celebrating the arrival of this child. Early June seemed like a perfect time to have a baby. I couldn’t wait to spend my maternity leave lounging in Central Park caressing those tiny little legs poking out of a cute little summer dress.

Two weeks later, the pregnancy ended with much less fanfare. Just a few rusty spots followed by a sonogram confirming the heart had stopped beating. Even after the D&C, I kept hoping that the baby was somehow amazingly still inside me, that the tests had been wrong, and the suction not been thorough. As my hormones came crashing down, I mourned the loss of my child.

Everyone reassured me that I would get pregnant again, that miscarriages are very common, that it was just my body’s way of taking care of an abnormal fetus. Their words didn’t ease my grief. I had felt a life in me, a quickening, until there was none. I walked around in the bright sunlight in a daze, going to work like a zombie, unable to accept that my baby had died.

Tonight’s Sunday Scribblings prompt is Lost. Head on over to see what others did with the prompt. And if you only have time to read one post, read this one by Granny Smith about the wonderful adventures of Jingle Bells the Bear – it’s not to be missed!

← Monsters of Templeton Book Review
>Could Baby TV Not Be As Bad As We Thought? →