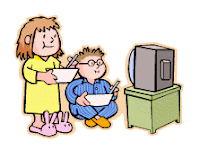 When Bella was an infant, I was adamant that she not be exposed to TV. I had read the AAP explanation that watching TV was harmful to children under two years of age, and I followed their recommendation to the letter. I not only refrained from exposing her to Baby Einstein videos, I also refused to let my father in law watch sports in her presence. I actually forced him to turn off the TV when she was in the room. In retrospect, I’m not sure how I did that. The force of my conviction as a first-time mom must have been nothing short of superhuman.

I pretty much succeeded in shielding her from the TV until she was two. It was incredibly difficult. Babysitters cursed me. Friends and family thought I was insane. But I held my ground.

By the time I had my third child, I had mellowed out considerably. One of Juliette’s first words was “Go” from the theme song of the Backyardigans. But even though I let her watch TV, I felt guilty about it, like I was eradicating her chances of attending an Ivy League school with every minute in front of the “boob tube.”

But yesterday, the Journal of Pediatrics and Harvard published the result of a study concluding that watching TV is not detrimental to children under three. It has no effect either positive or negative on their development.

Does this mean I have seven years of guilt under my belt that I could have lived without? Did I needlessly deprive Bella of hours of Baby Einstein viewing pleasure?

At this point, my guilt is water under the bridge. I tend to agree with Jessica Gottlieb‘s thoughts on this issue. This is just proof that parenting experts should not come down so hard on us mothers. We love our children and do what we do to keep them happy, sometimes ignoring their black and white rules. Because we know, in our guts, that the rules will change someday and that we know our children best.

3 Responses to >Could Baby TV Not Be As Bad As We Thought?