Before delving into tonight’s Tasty Tuesday recipe, I wanted to report back on my pirate birthday cake. Everyone was impressed with the cake and all of Jack’s friends were delighted by all the candy decorating it. Cutting into it was painful but the slices actually looked pretty good too. I was enjoying a slice of my own, filling my mouth with the chocolaty frosting, feeling like the ultimate mom, when I noticed that Jack was not at the table with his friends. He was playing ostrich with his head buried deep into the couch cushions. I walked over to see what the matter was and he whispered, “There’s something I want to tell you but I’m scared.” I knew before the words were out of his mouth that he didn’t like the cake. I wasn’t upset, I just felt so bad that he was worrying about it on his birthday. Once I assured him that my feelings were not hurt and that I was not mad, I handed him a new plate with plain cake and lots of swedish fish. He ran back into the party with a big smile, all worries erased. Next year I’ll be decorating vanilla icing instead of using chocolate. 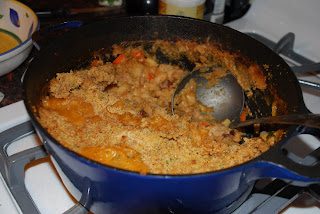 Now onto tonight’s recipe. French cooking is full of delicious hearty winter stews like Beef Bourguignon. The heartiest of the hearties is Cassoulet. A stick to your ribs white bean stew filled with sausage and duck confit. Cassoulet satisfies the deepest parts of your soul. It’s comfort food to the ultimate degree, but it definitely isn’t diet food or a quick and easy recipe.

I was a little skeptical when I ran across a Real Simple recipe for cassoulet that seemed relatively easy. I’m generally a purist when it comes to French cooking but I was intrigued. Because this recipe doesn’t involve dried beans or duck confit, I actually happened to have the ingredients in my fridge and pantry so I decided to give it a try. I ended up having cassoulet for the rest of the week. And I walked around every day in a deeply happy food coma state.

As the only source of fat in this version is from one pound of Italian sausage, it’s also considerably healthier than the real thing.

1) In a thick cast iron pot, heat the oil over medium heat. Cook the sausage until browned, breaking it up as it cooks. Remove from the heat and set to rest on paper towels. Remove the extra oil from the pot.
2) Add the vegetables to the pot and cook until softened, stirring frequently to prevent scorching, about five minutes.
3) Add the chicken broth, beans, thyme, and sausage and return to heat. Feel free to salt and pepper according to your tastes too. Bring to a boil. Reduce heat to low, cover, and simmer for about one hour. Stir occasionally until the mixture is thickened and the vegetables are tender.
4) Heat oven to 400 degrees Farenheit. Combine the breadcrumbs, parsley and butter in a bowl. Sprinkle the bread crumb mixture evenly over the cassoulet and put in the oven. Bake, uncovered, until the crust is golden, about 15 minutes.
5) Serve immediately or enjoy the next day reheated. I reheated mine in the microwave with no problem.

3 Responses to >The Cheater’s Cassoulet