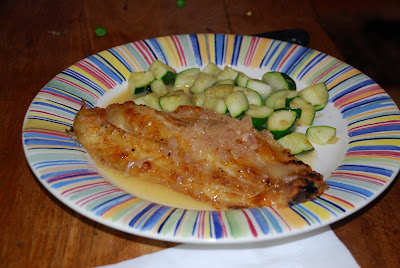 I’ve only begun to recover from the excesses of Thanksgiving. There were 37 guests at my in-laws, but we would have been able to feed 60 people easily. I gorged on all the decadent sides to go with the golden turkey for three of the four days of the long weekend, and am really happy to switch gears this week. My Tasty Tuesday recipe is still a little decadent (I am French after all) because of the sauce, but it’s still a low-fat broiled fish dish that’s perfect for post-holiday recovery. 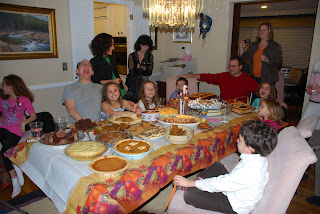 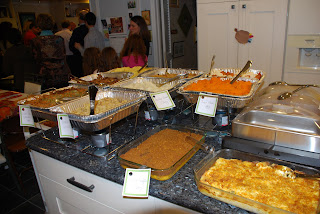 As they say a picture is worth a thousand words, here are a few pictures so you can see that I’m not exaggerating. Can you believe the dessert spread?

I served the snapper with sauteed zucchini, just sauteed over low heat with some butter (hee hee) and some diced shallots.

In a small saucepan, cook the Sherry, the shallot, the white wine, the vinegar over moderately high heat until the liquid is reduced to about two tablespoons.
Remove the pan from the heat, and whisk in the butter, 1 piece at a time, adding each new piece before the previous one has melted completely.
On a foil-covered cookie sheet, broil the fillets under a preheated broiler until they just flake (at least 5 minutes).
Divide the fillets between two plates and spoon the sauce over them.