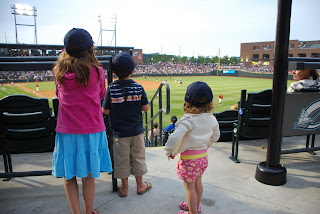 I’ve been a city girl for most of my life, first in Paris, then in London, Washington, and New York City. I was in denial that we had outgrown our New York City apartment for over a year before we finally moved to New Jersey. And it’s taken me close to five years to really embrace being a Jersey Girl with tomato plants and Little Tikes plastic toys in her backyard.

I still read New York Magazine cover to cover every month and devour the New York Times Dining Section every Wednesday, taking notes on all the newly opened restaurants. Just so I can pretend that I’m still in the know, that I can still pass for a New Yorker. It’s a reach with my beat up minivan and my mom clothes, but a girl can dream, can’t she?
When we landed in Ohio on Sunday and started driving around and spotting all the main streets already decked out in full 4th of July regalia, I realized that we would soon be living in a completely different America from the one I’ve come to know.
Change is scary, especially as you get older. Everything seemed so different to me: the landscape, the houses, and even the highways!
But on our last night in Columbus, I caught a glimpse of something great. We went to a Columbus Clippers game in downtown Columbus. We had never taken the kids to a baseball game before. They were all proudly wearing their Clippers hats. When we reached the top of the stairs, the field lay below us filled with players in red and gray uniforms, lit up by spotlights. The crowd was cheering and Michael Jackson’s Thriller was playing. The next player came up to bat and hit a home run. The crowd went wild.
We all stood under the lavender sky, mesmerized by the action at our feet.
Somehow, in all our time in New Jersey, we had never made the time for a Newark Bears game or a Yankee game. At the beginning of each summer we put it on our list of things to do and at the end of each summer we said, “well, next year…”
Two hours later, our bellies full of barbecue and popcorn, having done the wave and almost caught two home run balls, we walked out of the stadium with our first Columbus memory. After just a few days here, having cheered for the Clippers as they lost 4 to 12, we got a glimpse of life away from the big city. And we liked it. 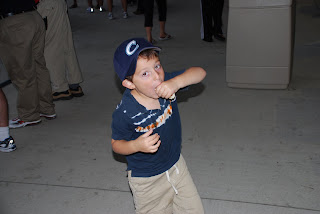 5 Responses to >A City Girl Greets the Midwest